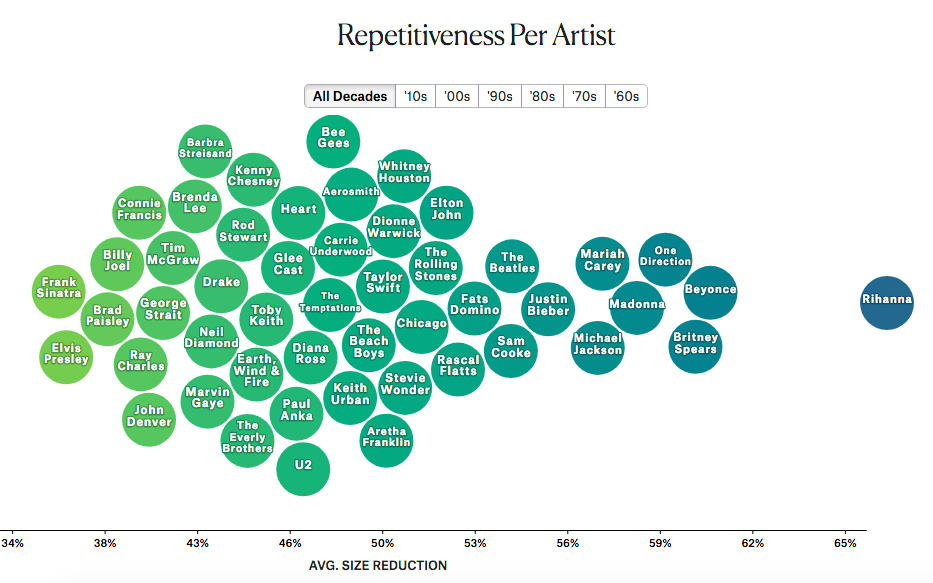 Colin Morris at The Pudding analyzed the repetitiveness of a dataset of 15,000 songs that charted on the Billboard Hot 100 between 1958 and 2017. It's true: pop music lyrics are increasingly repetitive.

Rhianna is the reigning repetitive champ among solo artists with at least 15 songs on the charts. Colin describes his methodology:

You may not have heard of the Lempel-Ziv algorithm, but you probably use it every day. It's a lossless compression algorithm that powers gifs, pngs, and most archive formats (zip, gzip, rar...).

What does this have to do with pop music? The Lempel-Ziv algorithm works by exploiting repeated sequences. How efficiently LZ can compress a text is directly related to the number and length of the repeated sections in that text.

Colin crunches a lot of numbers into beautiful charts, even showing repetitive distribution for individual artists from 10,000 Maniacs to ZZ Top.

• Are Pop Lyrics Getting More Repetitive? (Colin Morris / The Pudding via dataisbeautiful)