Piggies on the Parkway 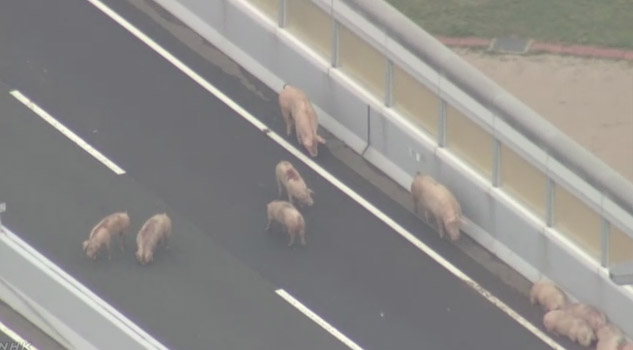 Haven’t we all seen a lot of pigs on the parkway? You’re driving along and happen to notice that the person in the next lane has their digit buried halfway up their snout, digging for truffles. And don’t ask me about what happens next—I just can’t deal with it. I can understand when 3-year-olds engage in this type of behavior, but adults just should not be doing this.

What you don’t expect on the parkway are real pigs … pink, porcine, and on the run!

An unhappy situation on a Japanese highway: a truck full of big fat piggies are on their way to meet their destiny when—all of a sudden—jailbreak! The truck crashes into a stalled car and the pigs make a mad dash for freedom, little hooves tapping on the asphalt, except they’re on a busy highway and there’s no place to go. The scene was captured by an NHK News helicopter.

In many countries there would be a grassy median in the center, or an easy getaway off to some grazing on the side of the road. But in Japan highways are often elevated, and since they pass directly next to homes, there are large sound deflecting walls on most of them. So, alas, the piggies were trapped and made the best of their few hours of freedom by lounging.

No pigs were injured in the making of this post. All the rascals were rounded up and returned to a new truck, where their journey to the great beyond resumed.