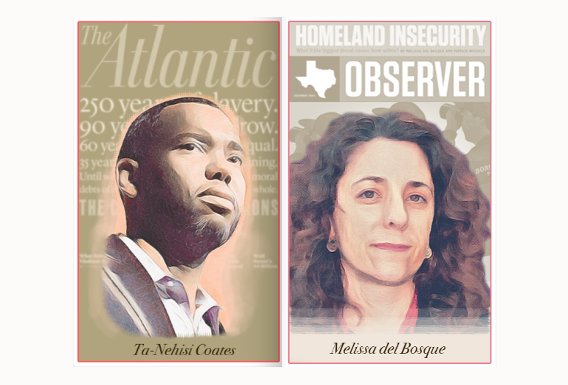 Dave Maass writes, "In the 1890s, a tobacco company included collectors cards featuring 'American Editors' in its cigarette packs. In all, they were 49 white dudes and one woman, and the only diversity was in their beards and mustaches."

Today, we're fundraising for the Society of Professional Journalists' San Diego chapter with updated cards featuring the reporters who truly represent contemporary journalism, starting with Ta-Nehisi Coates of the Atlantic and Melissa del Bosque of the Texas Observer. More will be revealed as we hit our fundraising goals.

This spring I was subpoenaed to testify in a judicial discipline case in San Diego related to reporting I'd done four years earlier while a reporter at San Diego CityBeat. I was investigating Gary Kreep -- the right-wing attorney spearheading the legal side of the Birther movement -- who had just been elected a Superior Court Judge. With pro bono legal help, we exerted California's Shield Law, and the subpoena was withdrawn. But I don't accept free help easily, so here were are. Kreep once wrote to me in an angry email: 'You give muckrakers a bad name.' That may be true, but now I want to give muckrakers a bunch of money.