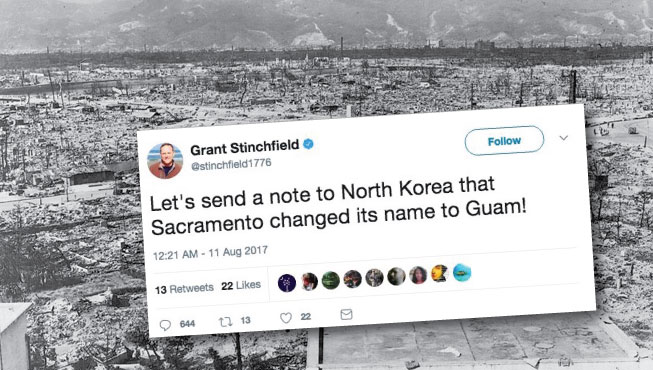 Grant Stinchfield thought his call for North Korea to incinerate millions of human beings was a real knee-slapper. He's sorry some people didn't find it as funny as he did.

“Let's send a note to North Korea that Sacramento changed its name to Guam!," he tweeted.

Internet users were quick to jump on the cavalier comment as a recommendation that North Korea try to hit a city on the U.S. mainland.

The tweet was also viewed as insensitive to the people of Guam, who recently received guidance about how to avoid being blinded by a potential attack.

Stinchfield told the Daily News Friday afternoon that he is sorry for the remark.

“It was meant as a joke and I regret it,” he said by phone.