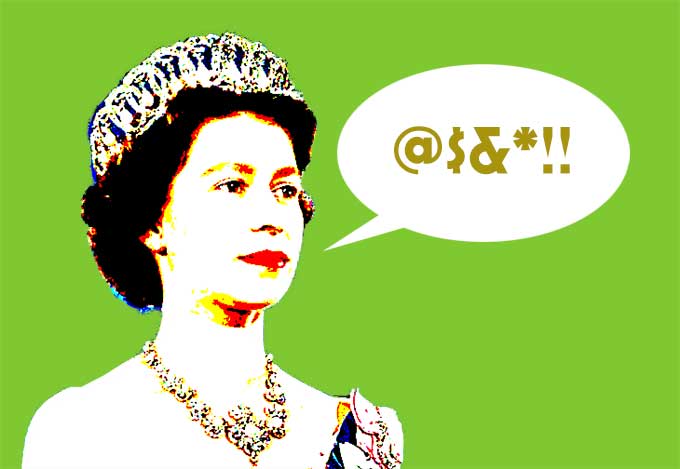 This week’s tabloids may not be entirely divorced from reality, but they are permanently estranged and consulting lawyers.

Many celebrities are horse lovers, but not Star Trek’s William Shatner. He has a “bizarre horse obsession” according to the ‘Globe.’ He rides and breeds horses, but the ‘Globe’ has found an “expert” who warns: “equine lovers get sexy kicks out of dominating powerful animals!” Don’t we all?

Ellen DeGeneres is suffering a “mental health crisis,” reports the ‘Globe.’ Its evidence? She admitted suffering depression back in 1998 when her TV series was axed. So she’s still depressed?

Clint Eastwood has given “Bride No. 3 wedding ring” claims the ‘National Enquirer.’ Or maybe his girlfriend Christina Sandera is just wearing a ring?

Jack Nicholson is battling an “Alzheimer’s Nightmare!” alleges the ‘Globe.” At least, that’s what unnamed “friends fear,” because the 80-year-old is occasionally forgetful. "The rumor is he has the beginnings of Alzheimer’s disease,” a “pal” says. Because that’s what pals are for. And where’s the fun in owning a tabloid if you can’t publish rumors?

“I killed Elvis!” states Priscilla Presley’s “shocking confession!” in the ‘Globe.’ As if. Priscilla supposedly “blames herself” for The King’s death “because she rejected his plea to get married again.”

Just like I blame myself for Michael Jackson’s death because I planned to attend his concert appearances and made him work himself to death. My bad.

And now Jacko’s “tomb is empty” according to the ‘Globe.’ Not taken by body-snatchers, but secretly cremated by his family, it seems. This story not only bears a remarkable resemblance to the recent tabloid story claiming that Princess Diana’s tomb is empty (it’s not) but also echoes wild rumors that ran rampant when the gloved one was interred in 2009. Invasion of the story-snatchers.

The ‘Enquirer’ claims a “World Exclusive” and the ‘Globe’ claims a “Royal Exclusive” as both identically report that Queen Elizabeth II has named son Charles as her heir. If they both report this, it must be true, which will come as a shock to absolutely no-one, as Charles has always been her heir apparent since his birth at 9.14 p.m. GMT on November 14, 1948. It’s true that the tabloids have repeatedly floated the fantasy that the Queen would by-pass Charles and donate the crown to grandson William - a constitutional impossibility. But the ‘Enquirer,’ not happy with actually getting a story right by default for a change, can’t help itself by adding that the “Queen Quits!” - an abdication which appears to have been missed by the mass ranks of Fleet Street’s finest. You'd think that might have made a paragraph or two in the British press, but apparently not.

The ‘Enquirer’ goes on to reveal that the Queen has ruled that Charles’ wife Camilla “can NEVER be queen!” Not exactly revelatory, since the official Royal spokesman at Clarence House said publicly before Charles wed Camilla in 2005 that she had no desire to ever be named queen. As the official announcement stated: “It is intended that Mrs. Parker Bowles should use the title HRH the Princess Consort when the Prince of Wales accedes to the throne.” But who remembers what the Palace said 12 years ago, right?

“Hollywood Pushers Tell All!” screams the headline in a ‘Globe’ exposé of celebrity drug abuse, as reliably narrated by "four of Hollywood’s top drug dealers.” Like the one who recalls allegedly selling cocaine to a morning TV show host (who I’ll refrain from naming here) 25 years ago when he worked at a local Rhode Island TV station. If you’re pushing coke in Rhode Island, are you really one of “Hollywood’s top drug dealers” . . ?

The celebrity magazines continue their headlong plunge toward irrelevance with cover stories that are vacuous even by their own airless standards: ‘People’ mag features HGTV’s ‘Property Brothers’ Drew and Jonathan Scott on “Fame, Family & Finding Love!” while ‘Us’ mag’s cover reveals that former 'Real Housewives of New Jersey’ stars Teresa and Joe Giudici are to “Divorce!” - except, the story inside quickly backpedals away from the cover’s claim, saying just that Teresa is “fed up” with her husband - not entirely surprising since he recently began serving a 41-month prison sentence for conspiracy and bankruptcy fraud. She is “considering leaving,” the increasingly timid report states.

The "Scientology battle gets ugly” between Leah Remini and Tom Cruise, as ‘Us’ mag declares: “It’s War!” But it’s not even a war of words - Remini slammed Cruise by saying that his public persona is different from “the person behind the mask,” while Tom hit back by saying . . . nothing.

‘Us’ addresses the Royal love story of the year, asking of Prince Harry and Meghan Markle: “Did he propose?” It’s unfortunate that the mag doesn’t have the answer. Not a clue.

Fortunately we have the crack investigative squad at ‘Us’ mag to tell us that Jenna Dewan Tatum wore it best, that Brooklyn Decker suffers “a crazy, unreasonable fear of toads” (but not frogs?), that ‘Vanderpump Rules’ star Stassi Schroeder (have they really run out of celebrities?) carries a “friendship crystal,” a Bytox hangover patch, and lip balm for her “permanently chapped lips” in her Chanel purse, and that the stars are just like us: they browse clothes, withdrew cash from ATMs, and “chow down.” Wait - the stars eat food just like us! Who knew?