The best white pen is the Uniball Signo Broad 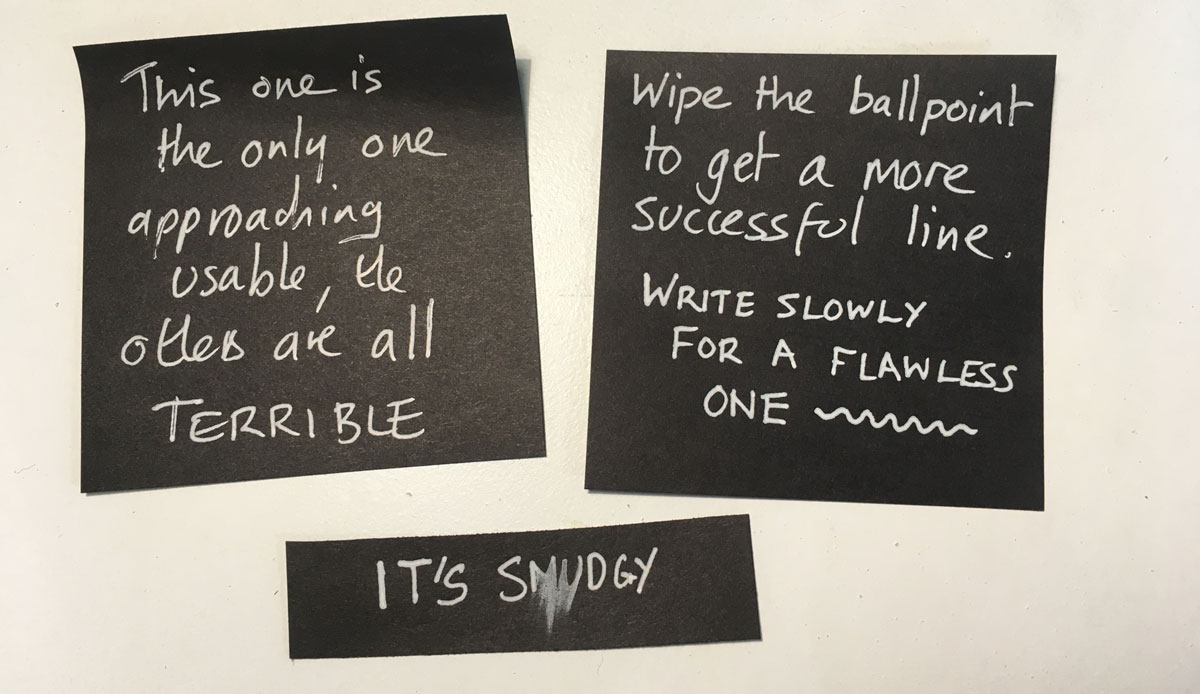 I tried a bunch of pens that promised an opaque fine white line on dark paper, and the only one that had an acceptable result was the Uniball Signo Broad. It was in a class of its own, superior even to markers (too chalky) and gloopy paint pens (hardly even work.)

I tried equivalent models from Sharpie (the water-based marker is too thick, and the metal-tube pen just doesn't flow well), Pentel (not remotely opaque), and Sakura (fine in a pinch.)

It wasn't perfect, though, and you'll have to write with more care than normal gel pens. In particular, the pigment dries fast on the ballpoint -- even as you write -- which can result in smudgy or lost corners or thin parallel tracks instead of the expected bold line.

I tried using it as white-out, too. It did OK over Pigma ink (not pictured), but was pretty rough over Higgins ink (below). Reinking over it with Pigma and Tombow pens was fine, but Higgins required a extremely light touch with a Hunt #102 nib.

UPDATE: My results comport with those of others! Here's Jetpens with a more exhaustive and illustrative roundup that nonetheless confirms that the Uniball Signo Broad is the best.

And here's a another roundup from Rachelle at Tinker Lab, which serves as an important reminder that craft store own-brand stuff is particularly terrible and that the best white pen is, you guessed it, sound the guns, stop the presses... the Uniball Signo Broad.

So, just get the Uniball Signo Broad [Amazon link]

P.S. the black Post It notes (Amazon) are hard to find in real life but I spotted them in Target last week, which is funny because Target doesn't sell any pens that will write on them.