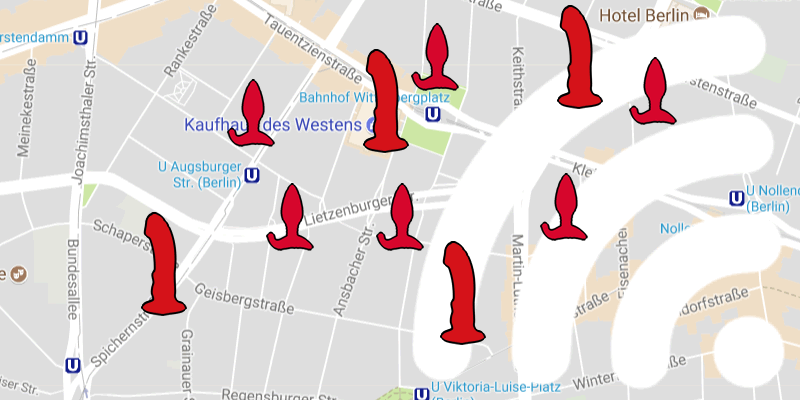 Bluetooth Low Energy (BLE) is the go-to protocol for low-powered networking in personal devices, so "smart" sex-toy manufacturers have adopted it -- despite the protocol's many vulnerabilities. That means that hackers can now wander city streets, detecting and compromising sex toys from the sidewalk, in a practice that Pentest Partners' Alex Lomas has dubbed "Screwdriving" (analogous to "Wardriving").

Lomas demonstrated the attack by wandering the streets of Berlin, compromising Lovesense Hush buttplugs. He also demonstrated that he could attack and compromise his father's BLE-enabled hearing aid, controlling what sound was played, allowing him to put voices in his father's head, or selectively alter his hearing.

Paul Di Filippo (previously) points out that he predicted this in his 2007 story Wikiworld, collected in the first Fast Forward anthology.

As it turns out, reverse-engineering the control messages between apps and a number of devices was not terribly difficult—the communications between the apps and the toys were not encrypted and could easily be recorded with a packet capture tool. They could also be replayed by an attacker, since the devices accepted pairing requests without a PIN code—allowing anyone to take over control of them.

The BLE beacons of these devices also make them particularly vulnerable to remote detection. The Hush in particular is vulnerable to tracking, as every Hush has the same Blutooth device name—making it easy to spot one while scanning. Lomas noted that while walking in Berlin recently with a Bluetooth discovery app on his phone, "I was genuinely surprised to see the Hush BLE name, LVS-Z001, pop up."