Cartoonist makes webcomic about losing his home in the Calistoga fire 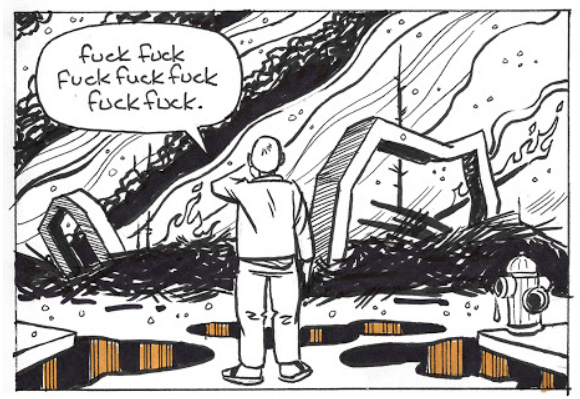 Tragically, cartoonist Brian Fies and his wife Karen lost their home in the recent Calistoga Fire. Brian shares their heartbreaking tale in his webcomic A Fire Story.

My house burned down. I made a comic about it.

That seems to be how I handle trauma. It's kind of a feature and a bug.

This is quick, loose work...

I'd be pleased if you'd consider this as a journalistic dispatch from the front.

My family, pets and I are all fine--a lot better off than many others. There's not a person in the county who hasn't been touched by this disaster. Karen and I know at least a hundred people burned out of their homes, including a lot of cops, firefighters, and government staff who've been working hard for others all week.

Above, a video posted by a passenger on a Philippine Airlines flight that headed out of LAX and then headed right back in again. KTLA reports: Passengers and people on the ground videotaped repeated blasts of flame coming from the right engine of the Boeing 777 minutes after takeoff. “I could see, like, flashes of […]

Over at Wirecutter, I have some handy advice for how to live safely with a space heater. Which is to say, don’t do what I did: It was the winter of 2019, and I was down in my unfinished basement putting the finishing touches on my band’s next album. I had to get through only […]