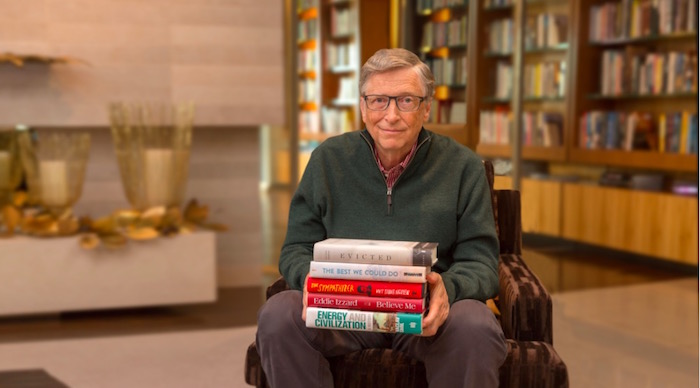 If you're looking for something good to read during the holidays, you might want to check out one of Bill Gates' top five "amazing books" that he recommends for your winter 2017 reading list. "You can’t go wrong with one of these," he promises on his blog, Gatesnotes. Here's the list:

The Best We Could Do, by Thi Bui – "This gorgeous graphic novel is a deeply personal memoir that explores what it means to be a parent and a refugee." Read Gates' review here.

Evicted: Poverty and Profit in the American City by Matthew Desmond – "Desmond has written a brilliant portrait of Americans living in poverty. He gave me a better sense of what it is like to be poor in this country than anything else I have read." Read Gates' review here.

Believe Me: A Memoir of Love, Death, and Jazz Chickens, by Eddie Izzard – "Izzard’s personal story is fascinating: he survived a difficult childhood and worked relentlessly to overcome his lack of natural talent and become an international star." Read Gates' review here.

The Sympathizer, by Viet Thanh Nguyen – "Despite how dark it is, The Sympathizer is a gripping story about a double agent and the trouble he gets himself into." Read Gates' review here.

Energy and Civilization: A History, by Vaclav Smil - "Smil is one of my favorite authors, and this is his masterpiece. He lays out how our need for energy has shaped human history—from the era of donkey-powered mills to today’s quest for renewable energy." Read Gates' review here.