#VanLife is not what Instagram makes it out to be 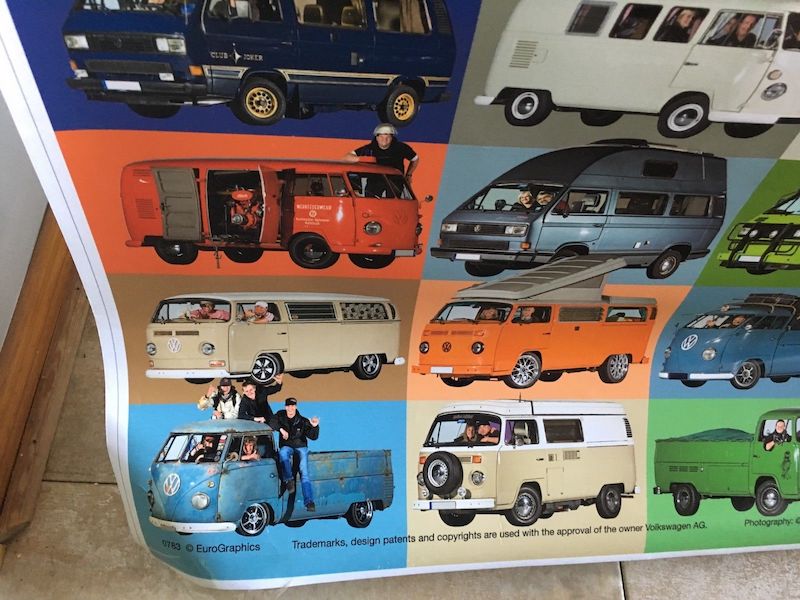 A reader sent us a link to an awesome VW microbus poster, so I bought it for my mechanic. In response to this nice gesture all the coolant dumped out of my engine.

When Rob forwarded this fantastic giant marketing poster of the many, many variants of VW van I instantly knew it belonged on my mechanic's wall. Mike the Mechanic and the generations of guys at Valley Wagonworks in San Rafael, CA have been keeping my vans going for around two decades (Hi, Paul!)

Having bought the poster on eBay a few weeks ago, this morning I drove over my local mountain and into town to pick it up at the Post Office. I took my 1987 VW Vanagon Westfalia because she's been running so beautifully since Mike put in a new starter, Monday. Everything was lovely as we drove up, up, up and then coasted down, down, down the big old hill. I parked and went in to retrieve the poster.

The poster tube was pretty big, and the gentleman at the post office was joking with me about what must be in there. We spent a couple minutes chatting, just long enough for a pretty large puddle of warm blue coolant to form under my Vanagon. Walking up to the car I saw the puddle and knew immediately it must be mine. Looking under the van I could not see the spring from which my precious coolant-of-life has sprung, but coolant was dripping off the engine block.

I hoped beyond hope that a sudden and new leak could only be a hose letting go. Please, please not the dreaded slow leaks that can start around the head gaskets. That leak signals real problems, and I'd hoped to avoid the heads rotting out with frequent fluid changes. This engine only has 25k miles on it. Everything was running so well!

#Vanlife involves a lot of this.

A quick drive with a refilled fluid reservoir, one eye constantly on the temperature needle and the low-fluid alarm light, the other on self obsessed Mill Valley drivers, got us nervously but safely back to Valley Wagonworks. Mike came out laughing about what could bring me back in 2 days, however a coolant leak quickly stole his smile. Didn't take him long to identify a burst hose of a type he claims we'll no longer use.

I'll have the bus back by 1pm. Luckily there is a bar next to Valley Wagonworks. They open early. Mike the Mechanic is grateful for the poster. He's repainting the shop and wants to cover his walls in cool VW stuff.

(If I'm in Southern CA, I rely on Layne at Westside Indie repair to get me back on the road.)