Property developer caught using critic's photo in promotional materials, demands an end to criticism as a condition of paying for the use 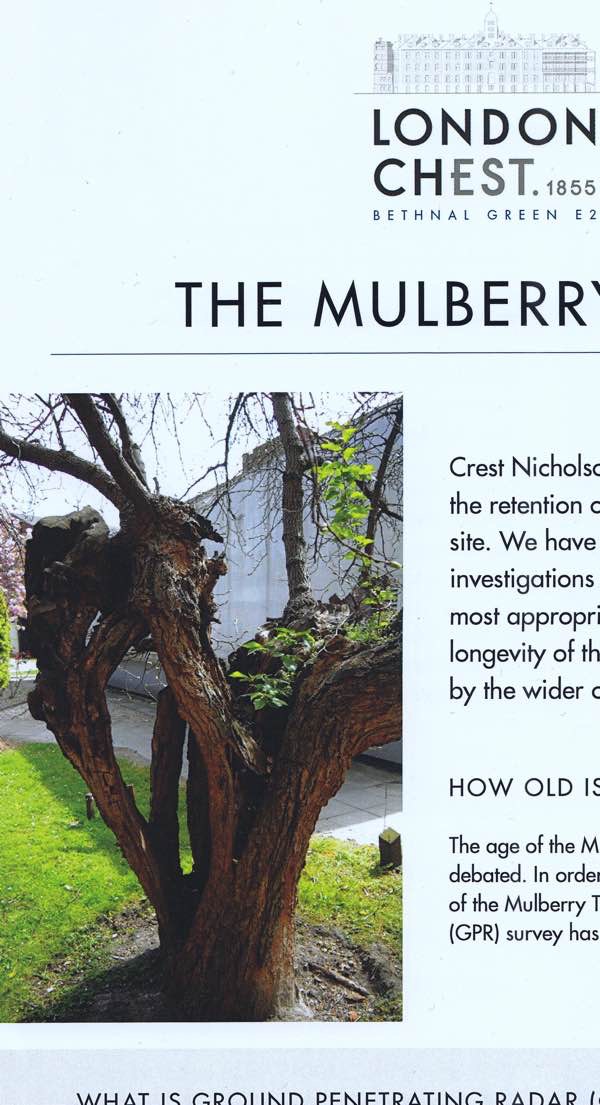 "The Gentle Author" is the maintainer of Spitalfields Life, a blog that has featured a brilliant and moving series of essays about the history of East London; Author is also sharply critical of the plans by giant property developer Crest Nicholson to redevelop the site of a Victorian chest hospital and dig up an ancient tree called the Bethnal Green Mulberry.

Gentle Author was surprised to learn that his sworn enemies at Crest Nicholson had used one of his photos of the endangered Bethnal Green Mulberry -- the very tree they were planning to kill -- in the promotional materials they were using to sell the plan, as part of a false narrative about the history of the tree, downplaying the damage their plans would do.

So Gentle Author wrote to the company and informed them that their use -- which is hard to square with even the most expansive views of UK Fair Dealing under copyright -- infringed his rights, and asked them to pay a fee, to withdraw their leaflets, to cease displaying it at their exhibition, and to never use it again.

Then, Kevin Maguire, Company Secretary to Crest Nicholson wrote back and said, essentially, "Sure, we'll pay you, but we demand confidentiality about this 'license fee' and you have to swear that you'll stop criticising our plan to knock down the tree whose picture we took from you without asking for permission."

So Gentle Author, who never offered confidentiality and has no intention of being bullied, published Maguire's letter and their amazing, blazing response, which includes this lovely phrase: "You underestimate me if you think that I will permit you to gag me by making it a condition of payment."

“by accepting this payment you agree that you shall not publish or cause to be published any false, misleading, derogatory, or disparaging comments about Crest Nicholson.”

You well know that I am critical of your proposed London Chest Hospital development and your attempts to secure permission to dig up the ancient Bethnal Green Mulberry, so I am unwilling to sign a document which would grant you recourse to take action against me if I were to write anything that you might choose to interpret as “false, misleading, derogatory, or disparaging.”

You underestimate me if you think that I will permit you to gag me by making it a condition of payment.

May I remind you it was your indefensible behaviour in using my photograph without permission in your leaflet discrediting the history of the Bethnal Green Mulberry which was the catalyst for this dialogue?

I am under no obligation whatsoever to accept any conditions of payment from you, but you are under legal obligation to pay me for the use of my photograph which was in clear breach of the law of copyright.

Please pay me without further delay.

A Reply From Crest Nicholson [The Gentle Author/Spitalfields Life]