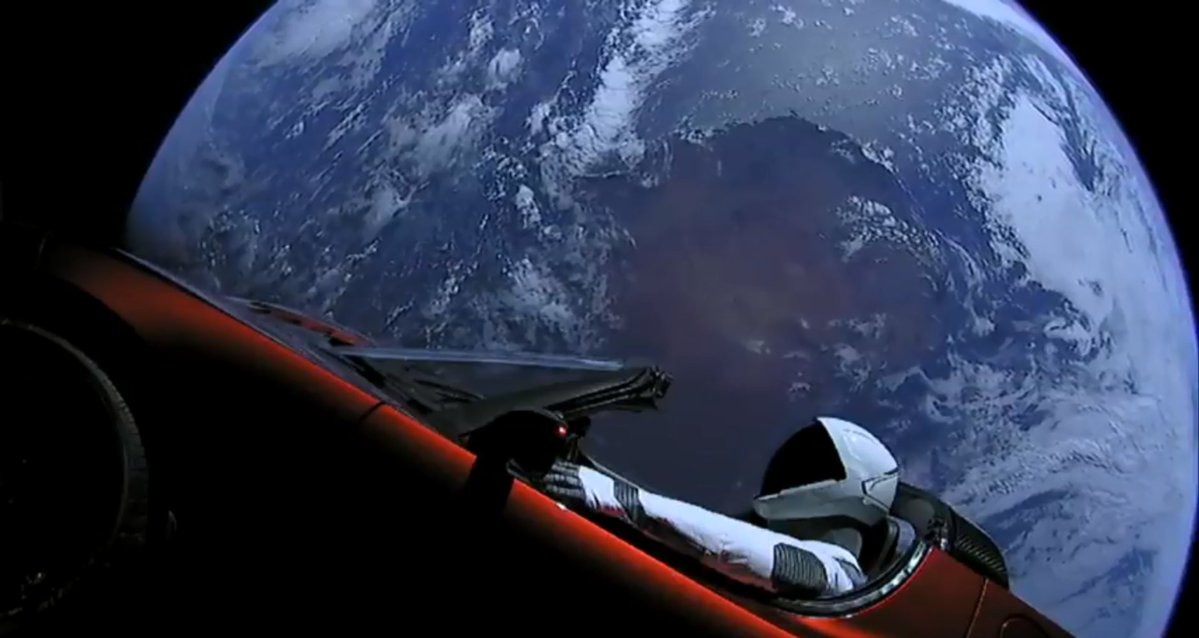 We were promised flying cars, and we finally pretty much got 'em. Elon Musk, Tesla, and SpaceX's 'Live Views of Starman' is the first car commercial broadcast in real time from space.

Who’d have guessed that HEAVY METAL would more accurately predict the future than 2001 or BLADE RUNNER? #FalconHeavy #SpaceX #Starman pic.twitter.com/dGNDrfEqZY

Elon Musk, Tesla, and SpaceX made history another way today, too. This 'Starman' stunt of sticking Elon's red Tesla roadster on the Falcon Heavy rocket with an endless loop of David Bowie's song — well yes, it's an ad. It's also an incredible human achievement. For the love of God, you guys, the dude pulled it off, with an incredible team, and they did it in a fully modern way. It's also legit weird. I have many feels.

There is a car, in space. Launched by a rocket with reused parts that landed back on Earth by a billionaire who wants to colonize Mars.

About Elon's big day... this is a car commercial in space. Everyone: pls stop participating.

What do you guys want??

How about a FUCKING CAR IN SPACE???

Best day at work ever .... I'm watching a live stream of a fucking car in space. DON'T PANIC - and thanks for all the fish

Fine, but if I have a choice of car ads, I’ll go with space launches over ghoulish appropriations of MLK speeches any time. https://t.co/fput8Whjn0

"Starman" will pilot the @Tesla #Roadster once it's released from the Falcon Heavy in space. The @SpaceX launch is scheduled for tomorrow https://t.co/g9DHU9n8ux pic.twitter.com/7fhtMYld2U

If Starman suddenly turns and looks at the camera, this instantly becomes a #DoctorWho episode. #FalconHeavy

If you're a space geek, you'll know how to answer this question in the future: Where were you on February 6, 2018. ?#SpaceX #FalconHeavyLaunch #Starman pic.twitter.com/5UesgEYsmd

The roadster has 'DONT PANIC' sign too in case the dummy Starman opens his eyes.
THIS IS NOT PHOTOSHOPPED#FalconHeavy pic.twitter.com/cRshwkY420

Just for fun: Stitched a bunch of frames together of #Starman and @elonmusk's car with a full horizon view of Earth #FalconHeavy #SpaceX pic.twitter.com/cvkuabUa5a

The Starman is super cool, but imagine if they gave him a flamethrower? ??#FalconHeavy pic.twitter.com/1B1bWNcRYI