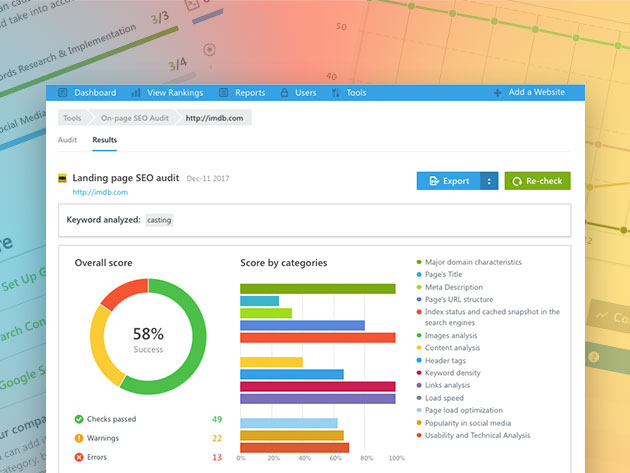 Search Engine Optimization, or SEO, has flourished into a hot topic amongst marketers and web developers aiming to promote their brands on the web. And, as more companies take their content online, competition to be on that first page of a Google search is growing.

There are ways to improve your standing, such as using popular keywords, but climbing to the top of the search rankings necessitates a two-fold approach: improving your site's searchability while keeping tabs on your competition. SE Ranking is an all-in-one SEO platform that lets you do both, and lifetime plans are on sale for $49.99 in the Boing Boing Store.

SE Ranking offers all the standard SEO tools, such as keyword position tracking and competitor research, while also including unique features like page changes monitoring and SEO ROI forecasts. With SE Ranking, you can learn which keywords your competitors are using in their ads and examine their budget, traffic, and the number of clicks their ads receive so that you can keep tabs on their performance.

Lifetime plans to SE Ranking are on sale for $49.99 in the Boing Boing Store.