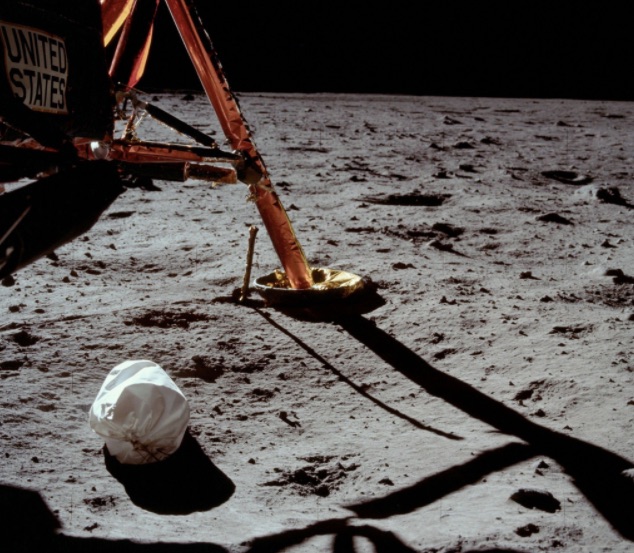 Humans have left approximately 400,000 pounds (181,000 kilograms) of "trash" on the lunar surface. That includes probes, rovers, landers, a metallic olive branch, a hammer and falcon feather (for a gravity experiment, image below), two golf balls, a javelin, a urine collection assembly (small), various rakes and hammer, a portrait of James Irwin, 100 $2 bills, flags, and so many more items. In fact, here is NASA's list of manmade objects on the moon, although it hasn't been updated in 6 years. From Space.com:

Although many people might call the odds and ends humans have left on the moon "garbage" (what else would you call a used urine-collection assembly?), NASA takes a kinder view.

Researchers can study these objects to see how their materials weathered the radiation and vacuum of space over time, (NASA chief historian William) Barry said. Moreover, some of the objects on the moon are still being used, including a laser-range reflector left by the Apollo 11 crew. [What Does the Top of the Moon Look Like?]

Researchers on Earth can ping this reflector with lasers, which allows them to measure the distance between Earth and the moon, according to NASA. These experiments helped scientists realize that the moon is moving away from the Earth at a rate of 1.5 inches (3.8 centimeters) a year, NASA reported.

The so-called trash left on the moon also has archaeological merit, Barry said. Future lunar visitors may want to view the old Apollo sites and see gear from NASA, the European Space Agency, the Russian space agency Roscosmos and other countries, Barry said.

"How much trash is on the Moon?" (Space.com)