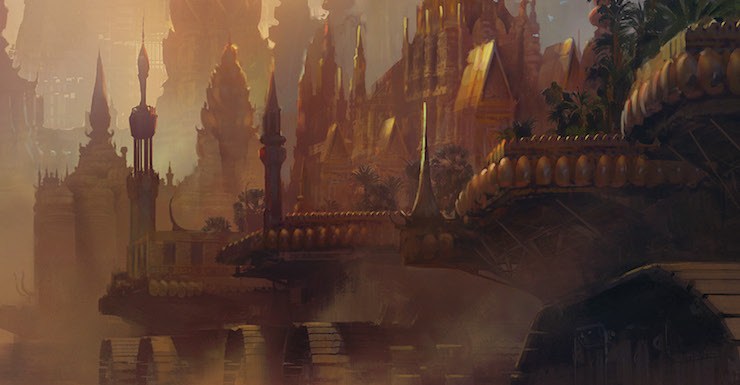 On a nameless, barely inhabitable planet, a vast road girdles the world, with great wheeled cities rolling slowly down its length. The cities are ruled by the Muljaddy, a caste of transhuman, semi-divine autocrats who oversee a vassal population whose major employment is dismantling the cities for raw materials left behind by the Builders, the mysterious race who created and abandoned the world in antiquity lost to history.

Karsman is the big man of one of these small towns. He once served a Muljaddy envoy as a guard in offworld trade missions, and his horizons are broader than any of his neighbors'. More importantly, Karsman has been enhanced with multiple constructed personalities that can swim to the fore and seize control of his body and mouth: a Diplomat, a Warrior, a Healer.

Like the materials that make up the cities, the constructs that fill Karsman's head were made by processes that no one fully understands, and Karsman can't control when his multiple personalities try to take over. Normally, that's not a problem, but now a trio of offworld mercenaries have come to Karsman's city, looking for a woman they are charged with assassinating.

The mercs are far beyond the power of anyone in the city, even the local Muljaddy and their temple guards. As the mercs ruthlessly take charge of the city, everyone looks to Karsman to do something about it -- and Karsman suddenly has to contend with the mysteries of his existence, mysteries he has carefully avoided looking too closely at all his life.

It's a truism that there are only two stories: "someone comes to town" and "someone leaves town." This is a fine example of the former: a bit of a western, a bit of a science fictional dystopia, an action story that combines vivid worldbuilding with great pacing and a deep mystery whose resolution is very satisfying indeed.

It's a great first outing from a very promising new writer.

The Warrior Within [Angus McIntrye/Tor.com]