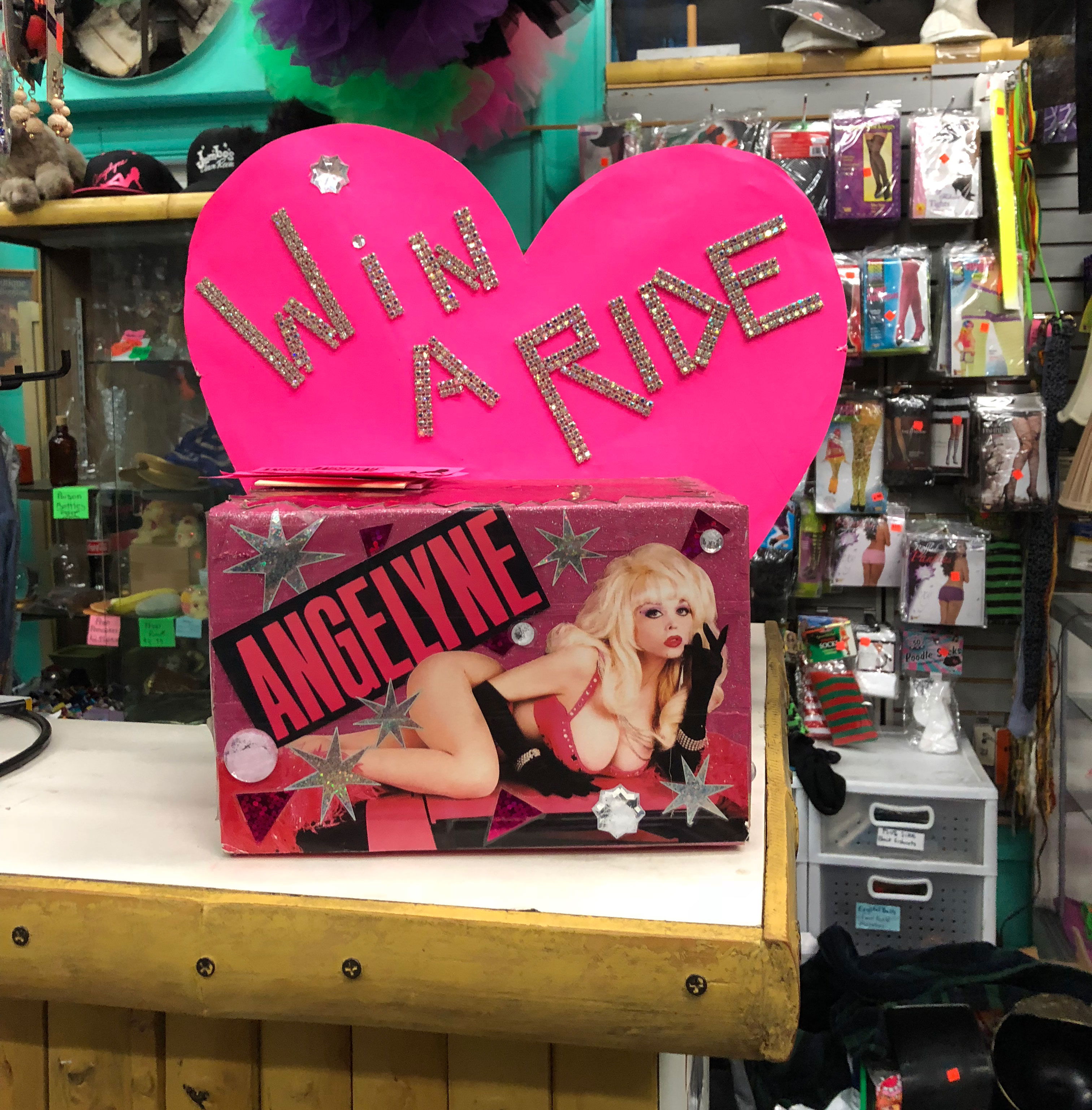 Our visit was short but yielded this epic photo of the three of us. I used the money Allee palmed me to quietly buy a t-shirt. Like the time I saw the Brown twins, I felt lucky stumbling upon Angelyne that day in Burbank.

So, nearly four years later, when Brittany invited me to fly down to meet the Angelyne with her, my answer was, "Of course I want to!"

We thought it would be fun to tell our stories of our afternoon with the billboard queen in tandem. (Brittany begins. My input is in italics.)

A few months ago I entered to win a ride with the legendary Angelyne in her hot pink Corvette.

Not long after I got a text message saying I won.

I was told I could bring a friend along and I knew exactly who I wanted to invite -- Rusty Blazenhoff. No one would appreciate this as much as she would!

It's true! I live for this kind of stuff.

Angelyne's assistant instructed us to meet her at the Coffee Bean and Tea Leaf. "Bring cash," he said. "She has merch."

Not her "assistant," her "secret agent," lol. That's how he described himself to me when I asked if he was her manager. He said he's been working with her for 30 years. His name is Scott and he literally wears rose-colored glasses.

And merch, OMG, so much merch!

As she greeted us, she gave us each a gem. She said Rusty’s was supposed to ward off evil. I didn’t get an explanation what mine was meant for. Angelyne was curious about the gem on the ring I the was wearing. “What is THAT?” she asked. “Forever 21,” I answered.

Mine is a Carnelian. It now sits in my pop culture trophy case gently fending off any bad juju. Angelyne was wearing a giant Quartz around her neck.

Angelyne instructs Brittany how to properly do the flamingo stance in front of the Coffee Bean at Sunset near Vine.

Ok wait, let's get back to the merch. I think it's important to note Angelyne's truly inspired "merch table." It's the trunk of her Corvette. She pops it open and voila! there's t-shirts, hats, buttons, keychains, backpacks, and other pink and black goods. I remember envying her makeshift store back when I first met her. (I've honestly considered a Blazenhoff merch-trunk, but it just wouldn't be as sexy as hers, as I drive a gray hybrid and live in the 'burbs.)

I also think a moment should be spent talking about the merch itself, as it's part of the overall ritual. Since I knew going into the meeting I would need cash, I brought a little over $100. Between the black trucker's cap (emblazoned with a large patch of her in her billboard's pinup pose), a pinback button, the opportunity to have our photograph taken together, and two large cups of coffee, I was soon parted with all of it.

I'm not complaining. I look at it as the price of admission to a wild one-of-a-kind ride, a bonafide quirky-as-all-get-out L.A. experience. I feel it was money well spent.

We briefly talked about out-of-body experiences, mass shootings, and what happens after you die as we drank “Angelyne coffee” (a blend of coffee, vanilla syrup, and African Sunrise Tea) out of tiny teacups.

I knew hanging Angelyne was going to be interesting experience but I hadn't anticipated getting deep into a philosophical conversation about death and the afterlife with her.

Then, she drove me in her hot pink Corvette around the block and down Hollywood Blvd with the windows down, blasting Angelyne’s very own music.

She asked if I wanted to hear a joke and of course I said yes. It went something like this: A woman buys an expensive dress and her husband is angry how much money she spent. She says "The Devil made me do it." He asks why she didn't say "Get behind me Satan!" She responds "I did! And he told me it looked good from the back, too!"

Angelyne asked which of her songs was my favorite. "All of them," I said and she skipped to "Sex Goddess." Then she told me we would be stopping at Denny's so she could use the restroom and said I should look up her music video for "My List" while I waited for her. When Angelyne returned, we walked back to her car and she asked me what I thought. She wanted to know how many boyfriends I had and if I wanted to get married.

She asked me if Brittany was a stripper (she's not). I asked her how old she thought her inner child was, shared that mine was between 12 and 15, and she responded, "Three!" Then, later, "Sometimes fifteen."

As we pulled back up to the Coffee Bean, Rusty was waiting there for us... and so was the person who was scheduled to have a ride next.

If you'd like to try and win a ride with the lady-in-pink, the entry box lives on the counter of Ozzie Dots, a costume shop on Hollywood Boulevard.