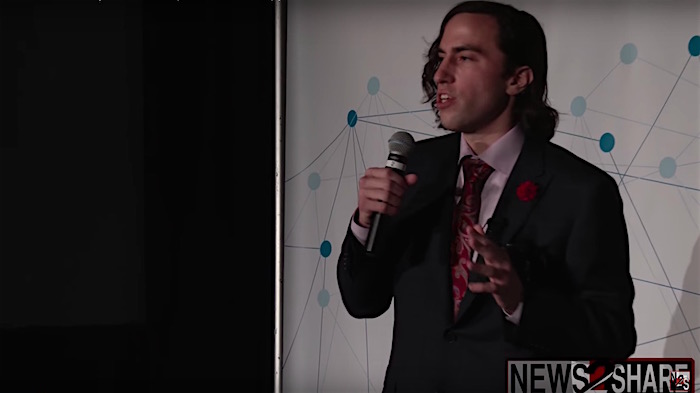 Biohacker Aaron Traywick, who self-experimented with unregulated medical products in front of live audiences, was found dead in a flotation tank at a spa in Washington, DC on Sunday.

The 28-year-old CEO of Ascendance Biomedical was known for promoting self-medicating and used himself as a guinea pig at public events. For instance, Traywick, who had herpes, appeared before an audience earlier this year and took off his pants so that he could be the first to inject himself with an unregulated medication his company created to combat herpes and AIDS (watch video below).

Traywick, who had herpes, had performed a stunt at the event, apparently injecting his company's unregulated product into his leg.

On stage, he had referred to the product as a "research compound".

But in conversation with the BBC he described it as a "treatment" - a claim that had the potential to attract the attention of the US Food and Drug Administration...

When questioned whether it was ethical to encourage sick people to effectively act as guinea pigs, Traywick responded: "The best we can do is we can say to these people, 'We know you don't have access to this medication.'

"They don't have any other options.

"All we know is that if it works they don't die."

The cause of his death hasn't yet been disclosed.

New biohacking from the Four Thieves Vinegar Collective (previously): the Pegleg, a stripped-down Piratebox (previously) based on a Raspberry Pi 0 with needless components removed and an extra wifi card soldered on.

The Open Insulin project ("a team of Bay Area biohackers working on newer, simpler, less expensive ways to make insulin") is trying to create an open source hardware system for making insulin in small batches, through a process that uses engineered yeast to "produce a modified proinsulin protein, and an enzyme to convert the modified […]

OpenDrop is a ~$800 microfluidics platform from GaudiLabs. It can be used to programmatically move droplets of liquid around a matrix. When I saw the video, I thought it was an LCD display, but it’s real liquid being moved around. Potential applications are lab on a chip devices for automating processes of digital biology. However […]