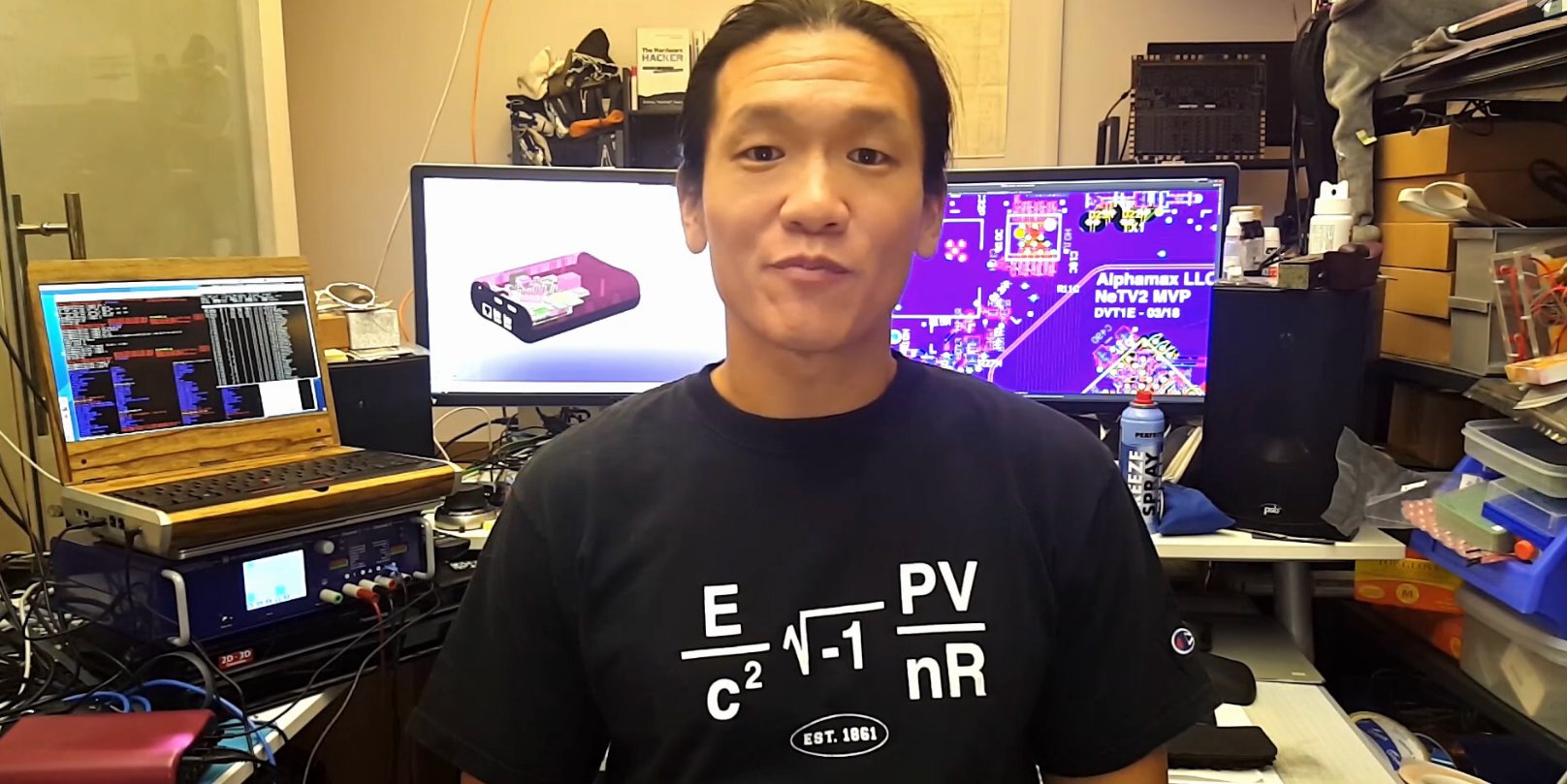 I’d like to share a project I’m working on that could have an impact on your future freedoms in the digital age. It’s an open video development board I call NeTV2.

It’s related to a lawsuit I’ve filed with the help of the EFF against the US government to reform Section 1201 of the DMCA. Currently, Section 1201 imbues media cartels with nearly unchecked power to prevent us from innovating and expressing ourselves, thus restricting our right to free speech.

Have you ever noticed how smart TVs seem pretty dumb compared to our phones? It’s because Section 1201 enables a small cartel of stakeholders to pick and choose who gets to process video. So, for example, anyone is allowed to write a translation app for their smartphone that does real-time video translation of text. However, it’s potentially unlawful to build a box, even in the privacy of my own home, that implements the same thing over the HDCP-encrypted video feeds that go from my set top box to my TV screen.

This is due to a quirk of the DMCA that makes it unlawful for most citizens to bypass encryption – even for lawful free-speech activities, such as self-expression and innovation. Significantly, since the founding of the United States, it’s been unlawful to make copies of copyrighted work, and I believe the already stiff penalties for violating copyright law offer sufficient protection from piracy and theft.

However, in 1998 a group of lobbyists managed to convince Congress that the digital millennium presented an existential threat to copyright holders, and thus stiffer penalties were needed for the mere act of bypassing encryption, no matter the reason. These penalties are in addition to the existing penalties written into copyright law. By passing this law, Congress effectively turned bypassing encryption into a form of pre-crime, empowering copyright holders to be the sole judge, jury and executioner of what your intentions might have been. Thus, even if you were to bypass encryption solely for lawful purposes, such as processing video to translate text, the copyright holder nonetheless has the power to prosecute you for the “pre-crimes” that could follow from bypassing their encryption scheme. In this way, Section 1201 of the DMCA effectively gives corporations the power to license when and how you express yourself where encryption is involved.

I believe unchecked power to license freedom of expression should not be trusted to corporate interests. Encryption is important for privacy and security, and is winding its way into every corner of our life. It’s fundamentally a good thing, but we need to make sure that corporations can’t abuse Section 1201 to also control every corner of our life. In our digital age, the very canvas upon which we paint our thoughts can be access-controlled with cryptography, and we need the absolute right to paint our thoughts freely and share them broadly if we are to continue to live in a free and just society. Significantly, this does not diminish the power of copyrights one bit – this lawsuit simply aims to limit the expansive “pre-crime” powers granted to license holders, that is all.

Of course, even though the lawsuit is in progress, corporations still have the right to go after developers like you and me for the notional pre-crimes associated with bypassing encryption. However, one significant objection lodged by opponents of our lawsuit is that “no other users have specified how they are adversely affected by HDCP in their ability to make specific noninfringing use of protected content ... [bunnie] has failed to demonstrate ... how “users ‘are, or are likely to be,’ adversely affected by the prohibition on circumventing HDCP.” (from Opposing Comment of Digital Content Protection, LLC Regarding Proposed Class Four, Regarding a Proposed Exemption under 17 USC 1201). This is, of course, a Catch-22, because how can you build a user base to demonstrate the need for freedoms when the mere act of trying to build that user base could be a crime in itself? No investor would touch a product that could be potentially unlawful.

Thankfully, it’s 2018 and we have crowd funding, so today I’m launching a crowd funding campaign for the NeTV2 in the hopes of rallying like-minded developers, dreamers, users, and enthusiasts to help build the case that a small but important group of people can and would do more, if only we had the right to do so. As limited by the prevailing law, the NeTV2 can only process unencrypted video and perform encryption-only operations like video overlays through a trick I call “NeTV mode”. However, it’s my hope this is a sufficient platform to stir the imagination of developers and users, so that together we can paint a vibrant picture of what a future looks like should we have the right to express our ideas using otherwise controlled paints on otherwise denied canvases.

Find out more about the NeTV2 at the Crowd Supply crowd funding site; or if you think reforming the DMCA is important but digital video is not your expressive canvas, consider supporting the EFF directly with a donation. Together we can reform Section 1201 of the DMCA, and win back our fundamental freedom to express and innovate in the digital age.