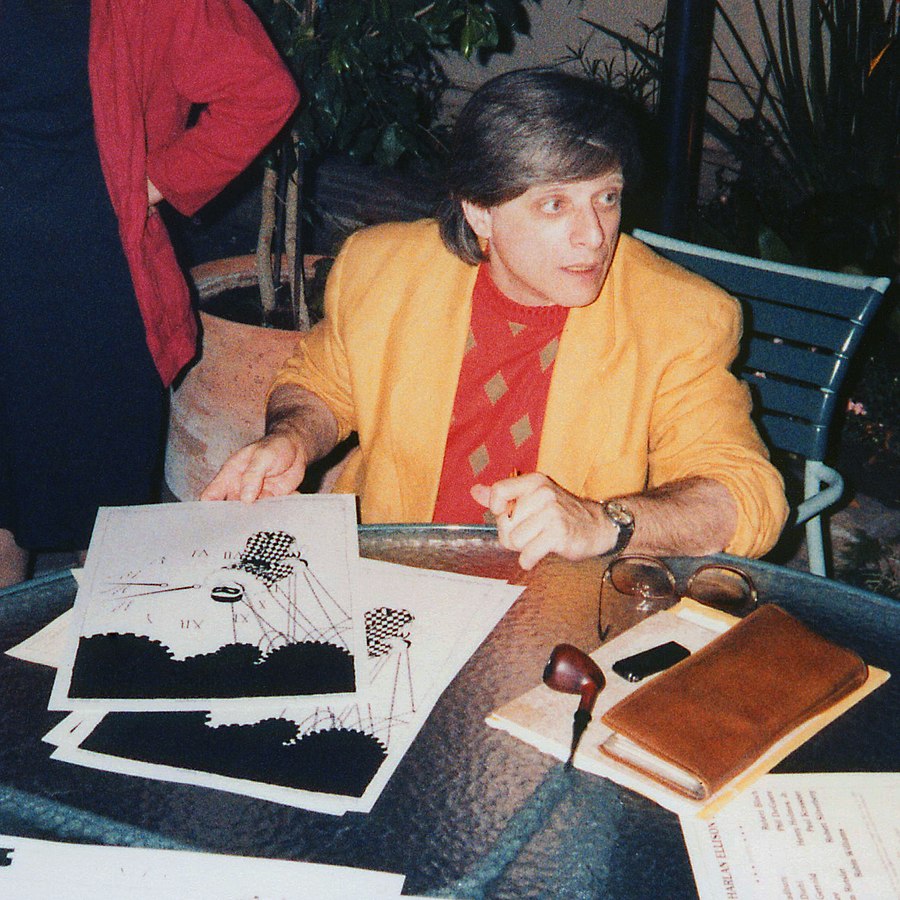 Harlan Ellison, essayist, editor and short story writer, has died in his sleep at the age of 84.

Ellison was a teacher of mine, in more ways than one. His brash, opinionated, angry prose style was incredibly attractive to me when I was an adolescent, learning to write; I first saw him at a live event in Toronto around 1989, and I was likewise impressed by his delivery and his stage presence.

Ellison's voice was infectious and has a tendency to creep into his fans' writing. When I was 19, I attended a writing workshop at a local convention taught by Ann Crispin, who told me that I would be pretty good writer once I stopped trying to write like Harlan Ellison (I went on to sell that very Ellisonian story to Pulphouse).

Harlan was one of my Clarion instructors in 1992. He taught us remotely, by speakerphone, from his hospital bed in LA where he was recovering from angioplasty. I had attended that year because I couldn't miss the opportunity to learn from Harlan Ellison, whom I held in highest regard ("hero worship" is not too strong a phrase to use here).

Ellison was not a good teacher (that year, at least). In fact, I think it's safe to say that his instructional methods, which involved a combination of performative bullying and favorite-playing, were viewed as a disaster by all of my classmates, at least in hindsight.

Confronting the very real foibles of the object of my hero-worship was the beginning of a very important, long-running lesson whose curriculum I'm still working through: the ability to separate artists from art and the ability to understand the sins of people who've done wonderful things.

These are two questions that have never been more salient in the age of #metoo, and I often ponder this journey I've gone through in my views on Ellison since my adolescence. Because my conflicts with Ellison only escalated over the years: for example, he was a copyright maximalist who never really came to grips with the free expression dimensions of his views (memorably, I was once on a panel with him about this where he called someone who disagreed with him on this subject a "motherfucker" and threatened to punch him in the face) and I was in the front row when he humiliated a respected woman colleague in front of all of her peers.

For years, incidents like these made it hard for me to reread Harlan Ellison.

But over the years, as I committed my own share of missteps and came to realize that I'd made them, and as I've reconciled with friends who had done great wrongs themselves, I have discovered some place inside me where two things can be true: that someone did something bad, and that someone did something good. Importantly, I can have these two views without the need to balance them ("the good outweighs the bad, so we can still be friends"), because balance is so often erasure ("with all the good he's done, why dwell on the bad?").

I don't think that this is a lesson Ellison ever set out to teach me, but it's one I've learned from him nevertheless (come to think of it, there's a beautiful section in "Prince Myshkin, and Hold the Relish" where Ellison explains how Dostoyevski is still a great author even though he did thoroughly reprehensible things).

Because Harlan Ellison was an amazing writer; not always, but enough of the time, and with sufficient magnitude, that he shaped generations of writers, and inspired me. The eloquence and passion he brought to fighting injustice were my own apprenticeship (even though we sometimes disagreed thoroughly on what constituted "injustice"). Ellison has been my lifelong test-case for figuring out how to admire the admirable parts without excusing the parts that couldn't be excused, someone whose good deeds and remoteness gave him a salience without any kind of personal baggage (I could be angry at Ellison without worrying about taking it out on him, because we didn't socialize). As a training ground for finding space for two contradictory feelings, you couldn't ask for better than Harlan Ellison.

My heart goes out to the people who loved him, and there were many of them, because Harlan inspired a fierce love in his friends. It's not hard to understand why, especially when you've got the lessons of Harlan Ellison to guide you.

Susan Ellison has asked me to announce the passing of writer Harlan Ellison, in his sleep, earlier today. “For a brief time I was here, and for a brief time, I mattered.”—HE, 1934-2018. Arrangements for a celebration of his life are pending. [Christine Valada/Twitter]

Disabled dog gets her wheeeeeelchair

Her name is Luca, and look at her go on those new wheels! She’s a little french bulldog. My parents dog. She’s about 4 years old and due to a neurological disorder her hind legs decided to crap out on her. Luckily she’s a brick shithouse and is loving her new ride. Thing handles like […]