When Donald Trump entered the election race, it brought Bloom County creator Berkeley Breathed out of a much-deserved retirement to lampoon Cheeto Hitler as only Milo, Opus, Bill and the gang could; the first collection chronicled the 2016 campaign, and a second collection, Brand Spanking New Day is a comic snapshot of one of the weirdest, worst years in living American memory.

I missed this book when it first came out (it's a year old!) and only found it at the IDW booth at Comic-Con last week. But I'm weirdly glad to have come to this so late, because it's a timely reminder of just how much and how little have changed since the election, and it made me laugh so, so hard.


The rebooted Bloom County features classic BC's cast of characters, with some very welcome additions, like Sam the Lion, a terminally ill child whom Steve ended up semi-adopting in a bid to impress his hot mom that ended with Steve finding a compassionate side to his own character.

The election brought the return of the Meadow Party, much-loved from the Reagan/Bush I/Clinton years, as well an an effort to draft both Bill and Opus to front the Democratic and Republican presidential bids. The Boingers try to get booked to play the RNC. Opus gets a new, smart-tie.


As always, the Bloom County gang are at their best when they're mixing silliness with trenchant political commentary (Opus's "pregnant pauses" are a particularly hilarious/wince-inducing running gag), and Breathed, having cut his teeth lampooning Ronald Reagan, has been in training for this moment for nearly 40 years.


My favorite moment in the book is the series of strips that follow from election day, 2016: a rain of cows. 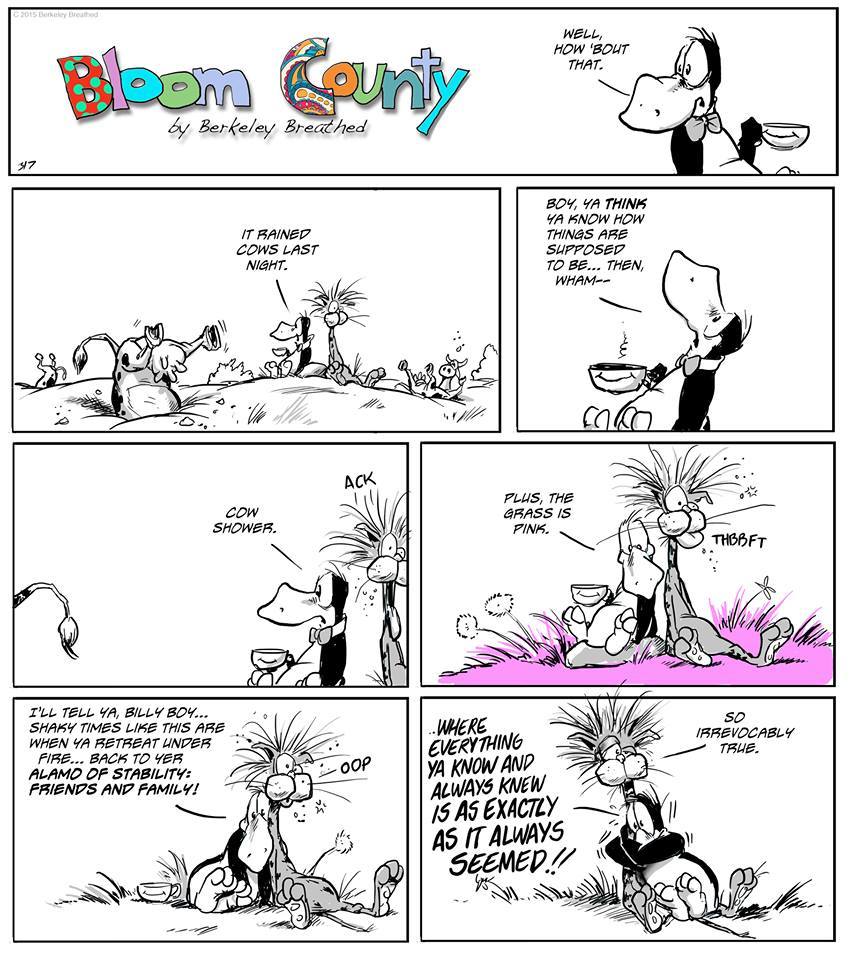 I laughed loud and long enough at this book to annoy my family. I've pre-ordered the next collection, Bloom County: Best Read On The Throne, which is only a month away!