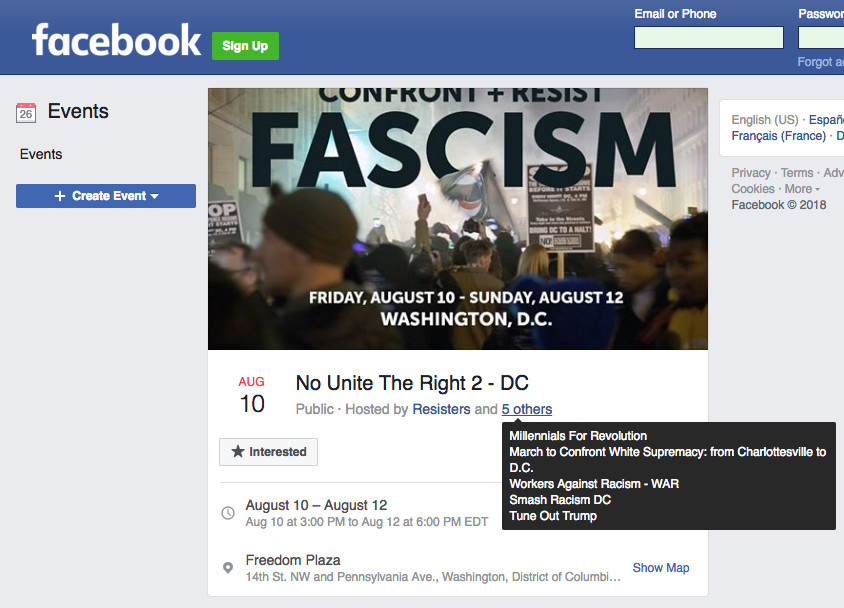 Like Linus Van Pelt searching the pumpkin patch for a really sincere pumpkin, Facebook has been scouring its political organizing pages for really sincere protesters, and loudly and performatively purging any activity it deems to be "inauthentic."

One of the casualties of this purge is the countermarch for Unite the Right organizer Jason Kessler's planned "white civil rights rally" in Washington DC.

The counterdemonstration, organized under the banner of "Hate Not Welcome: No Unite The Right 2" was removed by Facebook, who loudly accused the organizers of being paid Russian trolls hoping to stoke American divisions. Except these organizers are actually well-known, American activists, posting from within the USA, about an issue they care deeply about.

Among these genuine, American organizers is Chelsea Manning, the US military veteran and heroic whistleblower, who explained that the protest was "real and organic," adding "We started organizing several months ago. Folks from D.C. and Charlottesville have been talking about this since at least February."

It really hasn't been that long since every progressive cause and event was accused of being a front for Russian fifth columnists and Senator Joe McCarthy was hauling anyone who advocated for a better life for all Americans in front of his House Un-American Activities Committee. Not much has changed. I guess the Democratic establishment finds talking about Russian hackers easier than campaigning on a $15 minimum wage, Medicare for All, and breaking up the big banks and bringing them to heel.

Earlier today, Facebook deleted numerous Facebook pages, including one event aimed at promoting a protest against Jason Kessler’s Unite The Right 2, the sequel no one asked for.

The Shut It Down DC Coaliton has been meeting for weeks. We took over the Facebook event created by outside groups, in a desire to keep it accountable to local organizers…We did not promote anyone’s views except our own.

Black Lives Matter D.C. and numerous other groups are central to organizing against a real threat to D.C. We do not organize because of a FaceBook account purportedly run by Russia, we do this to make sure our loved ones, communities, and neighborhoods stay safe from fascists in, and out of, uniforms.