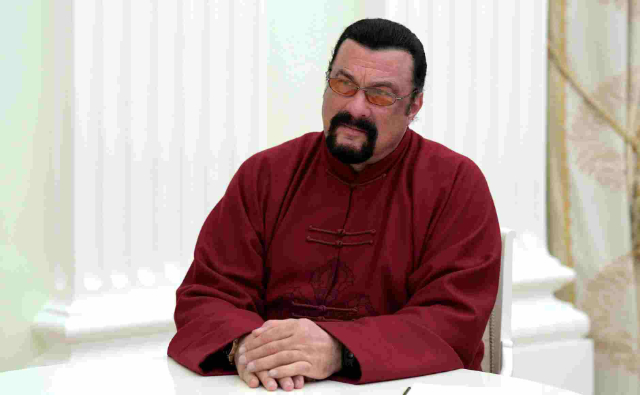 You likely remember Steven Seagal from blockbuster films like Hard to Kill, The Glimmer Man, Under Siege and, more recently, his being identified by The Washington Post as a serial sex abuser. That’s just Seagal’s public face on this side of the water. He’s wicked famous overseas, too. Russians purportedly adore the man’s films and value his opinion. He routinely rubs elbows with the country’s elite. In 2016, President Vladimir Putin went so far as to award Seagal a Russian passport. Putin, who apparently loves him some foreshadowing, said that the gifting of the passport was “…a symbol of how fractious ties between Moscow and Washington were starting to improve.”

Fast forward a few years: relations between the two Cold War adversaries have indeed improved, thanks to Russia’s meddling with the the U.S. presidential elections, backroom cash deals between Russian oligarchs and well-placed members of the American government and spies screwing their way into the halls of power.

With things going so swimmingly and filth rising to the top, there could be no better time for the Russian Foreign Ministry to announce that, to keep the good vibes for Russia going, they’ve appointed Seagal as their ‘special representative for Russian-U.S. humanitarian ties.’

Just let that title soak into your brain until you can’t feel anything at all.

The Russian Foreign Ministry likened Seagal’s new role to that of a U.N. goodwill ambassador and said that the actor, who is known for his martial arts prowess, would receive no salary.

“It’s a case of people’s diplomacy intersecting with traditional diplomacy,” the ministry said.

Seagal, who sometimes appears on Russian state TV to talk about his views and career, was cited by Kremlin-backed TV station RT as welcoming the appointment.

“I’ve always had a very strong desire to do all I can to help improve Russian-American relations,” RT cited Seagal as saying. “I have worked tirelessly in this direction for many years unofficially and I am now very grateful for the opportunity to do the same thing officially.”

Look, there’s an upside to all of this: the more Seagal is in Russia, the less he’ll be over here. That’s gotta be a win.

Image via official website of The President of Russia