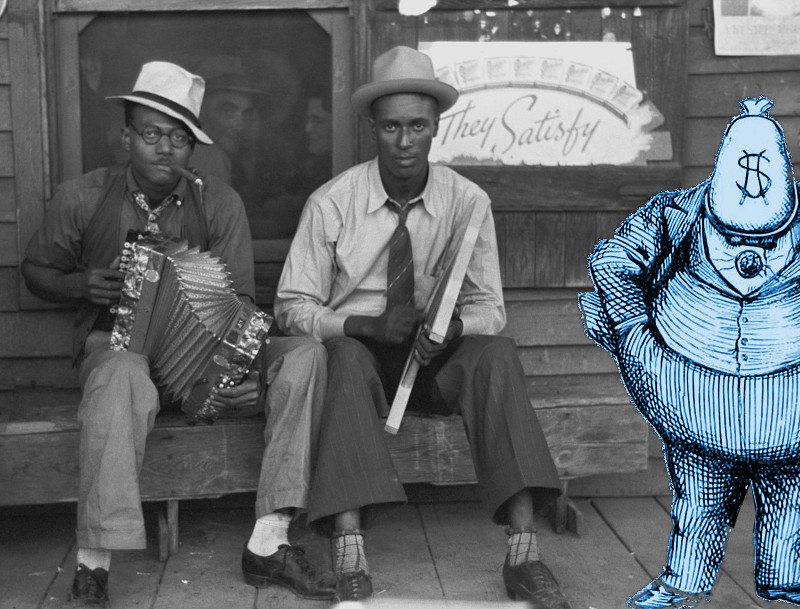 There are more people who want to make art than the market would support, and the arts are a highly concentrated industry: combine those two facts and you get a buyers' market for artists' work, controlled by intermediaries, who take almost all of the money generated by the work.

This is true in lots of industries, but it's especially pernicious in entertainment markets, because copyright helps fight competition. Once an intermediary corporation (like a record label) captures an important part of the distribution market, it can demand that artists sign over all or some of their copyrights as a condition of being distributed by the company.

Copyright is a regulatory monopoly -- the right to ask the government to punish people who use the copyrights you control -- and that means that once the intermediaries leverage their distribution chokeholds to amass large catalogs of copyrights, they can use those copyrights to buy or destroy competing intermediaries (think of Disney buying Marvel, Lucas, and Fox), getting even bigger and controlling even more of the market and setting take-it-or-leave it terms for the artists who want to access that market (think of Disney forcing the Guardians of the Galaxy actors to appear in sequels even if they think James Gunn got a bad deal).

When Big Content met Big Tech, the deal was sealed. The highly concentrated tech sector and the highly concentrated entertainment sector may squabble over how much of the money from art goes to which industry, but they're both in firm agreement that as little as possible of that money should go to the artists who created the work that they're selling.

Artists sometimes can leverage their fame to command higher pay, but the artists who are famous enough to pull this off are a sub-one-percent rounding error of all working artists. Everyone else is left in an increasingly concentrated sector with less and less leverage.

The best part? 12% is an improvement. Before the internet came along, it was seven percent.

There are two things we could do to improve artists' share of the income from their work: 1) Increase competition by breaking up digital monopolists and content monopolists and block future anticompetitive mergers; 2) Give artists the ability to claw back their copyrights after a couple of decades (some copyright systems have a complex but promising reversion system after 35 years) so the artists who got successful after signing a bad deal can take their rights back and negotiate a better one.

But giving artists more years of copyright or broader copyright? All that will do is increase the muscle of the content companies, who will use their leverage to take all those new copyrights from artists, use the copyright to drive out their competition, and then use the lack of competition to demand an even larger share of even more artists' income.

Anyone who thinks this is about Big Content vs Big Tech isn't paying attention. Big Content and Big Tech have the same major institutional investors, and often the same billionaire investors, too. The wars between Big Content and Big Tech are a glitch caused by the same rich people hiring different sets of managers to grow their wealth, and the managers attacking each other because their bonuses are based on how their unit performs, not how the investor class does overall.

Musicians have thus turned to touring as their main source of income nowadays. The strategic shift has paid off in some ways — but barely. According to an extensive report from Citigroup (via Pitchfork), out of the music industry’s $43 billion revenue in 2017, only 12% actually went to artists. For the math impaired, that’s just a little over $5 billion going to the people who are essentially the foundation of this entire business.

Where does the rest of the money go? Per the report, a good chunk of the revenue is pocketed by the middlemen — those working in the distribution services like AM/FM radio, online platforms, and record labels.