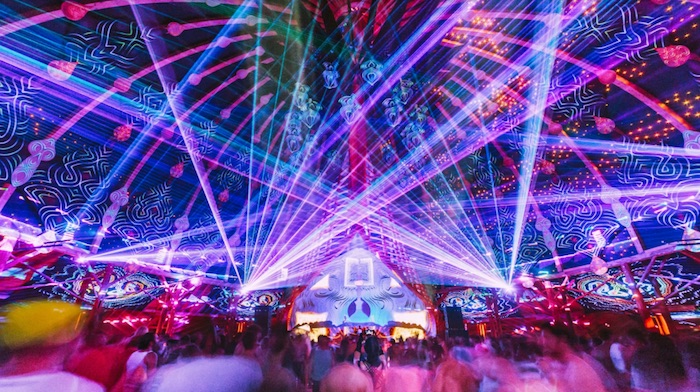 Every year, summer brings a merry-go-round of global music festivals. For the past 15 years, I've been keenly surfing the international weirdo festival circuit, from small parties to mainstream mega events. The one place I keep coming back to—and attended again this year—is the EDM festival, a psychedelic tribal gathering, called OZORA.

OZORA
Started in 2004, OZORA has steadily grown to become a global center of psyculture, bringing together 30,000 people from all over the world to a remote location in rural Hungary. This temporary village is a weird wonderland, populated by a carnivalesque parade of neo-hippies, steampunk freaks, impish elves, delightful fairies and other eccentric creatures with dreadlocks, dressed in fancy costumes and impressive tattoos.

This colorful bunch of happy mutants entertain themselves for a week, dancing amidst a blizzard of sensory stimulations: a dozen music stages powered by hundreds of DJs, live bands and stage performances, art installations, LED-illuminated structures, kaleidoscopic lights and laser projections. On top of all that, the event offers daily yoga sessions, cooking classes, massage workshops, fire-spinning and juggling lessons, a visionary art gallery and a mind-expanding lectures series featuring prominent underground intellectuals. All in all, it's an electrifying, playful and intense experience. For my money, it's the quintessential experience in exotic, otherworldly fun.

Collective Joy Events
Barbara Ehrenreich, in her brilliant book Dancing in the Streets: A History of Collective Joy, analyzes and documents the phenomenon of "Collective Joy" events throughout the centuries. Ehrenreich interprets this kind of playful and partyful festivals—having their pre-Christian precursors in Roman Saturnalia and Greek Dionysian rites—as rooted in ecstatic religious traditions that have been repressed and marginalized by European and Euro-American mainstream culture for centuries. The cyclical re-emergence of such events in Western society seems to fulfill a deeply rooted impulse of the Collective Unconscious. Present day electronic dance music festivals are a direct offspring of counterculture happenings and events from the 60s and 70s. They are also the latest expression of the ancient lineage of Ehrenreich's Collective Joy event, archaic revivals of the spirit of Dionysius—the archetypical God of ritual madness and religious ecstasy.

Festivals are Temporary Autonomous Zones, happy bubbles where a group of strangers can escape from the routine pull of everyday life. Rhythm, music and dance are ancient and acknowledged technologies for ecstasy, whose "synchronizing force" has the power to arouse, enchant and enrapture, allowing individuals to synch with one another and become a collective. The DJs, acting like the techno-shamans-in-residence, are the ones capable of modulating the "collective energy" of the crowd partaking in the dancefloor ritual. The singular combination of people and place, music and dance, and (if one is so inclined) psychoactive compounds, can lead to communal connection, a flow state, bliss, feeling of cosmic oneness, and ultimately to that altered state of consciuosness called trance.

Are these poeple idiots?
I believe that everyone should be able to access their own Collective Joy experience of choice. However, I am not suggesting that everyone should attend these kind music of festivals. As a matter of fact, most of the people I know (besides my close-knit psy-tribe), would find such places unpleasantly weird and terribly chaotic! To many, the sustained collective dance may appear incomprehensible and hellish, the repetitive music beats boring or outright disturbing. Unless one is personally drawn to these places, the true significance of such events and the potential thrill of "the vibe" is something lost in translation. Leading Italian ethnobotanist Giorgio Samorini comments about a possible outside observer witnessing such events:

People who know nothing about this and watch this, their fair judgement could be: "These are idiots." I usually say to them: "Hey, pay attention to your judgment. Because there, on the dance floor, these people indeed discovered something. There is something wonderful, that you don't understand. First try to study and know something about what is the Collective Trance."

Let's dance!
It's been said that: "Those who were seen dancing were thought to be insane by those who could not hear the music." However, it is during such festivals that I find some of the most entrancing, innovative, sophisticated sounds. And I do believe that some of these sounds can be savored even in a home-like context. While I can't guarantee you'll reach a trance state listening to this while dancing in your living room, it might be fun to give it shot. Being an amateur DJ myself, here's a cherry-picked selection from my personal playlist. Let's see if I can make you dance!

Here are three of my favorite tracks (elegant rhythms with refined melodic lines). Each one has its own character and vibe—downtempo beats, gently escalating to something that invites you to move your body and get down with your funky self! In no special order, check out:

Remix is among my favorite, playful art-forms. Here are two refreshing remixes of well-known pop songs, by acclaimed sound conjurers:

For upbeat grooves, to enjoy while spacing out by yourself alone, or for laid-back social occasions, trust the sonic tapestries of psy-dub maestro OTT:

Shifting gears to a more mellow vibe, here is something a bit more from a meditative, and contemplative, zone. The poetry of chillout is courtesy of Carbon Based Lifeforms.

Last but not least. One the most glowing albums that has provided me with endless doses of wonder and joy. Music that speaks to the body, mind and soul.

From the heroic imagination of Shpongle, check out Nothing Lasts... But Nothing Is Lost: