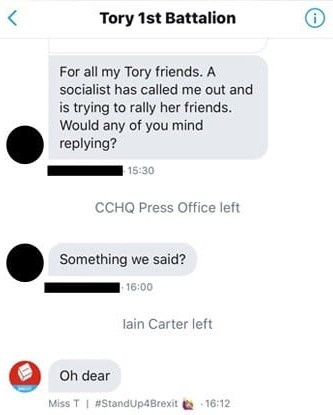 Messages leaked to Buzzfeed reveal the bizarre story of the "Tory First Battalion," a secret Twitter group formed to capitalise on the smear that the Labour party was anti-Semitic by coordinating and amplifying anti-Corbyn messages.

It turns out that assembling all of the Conservative Party's most rabid supporters into a single, coordinated body was double-edged sword: after all the Tories have been riven by internal leadership disputes for most of a decade, going so far as to break the country off from the EU in a failed bid to settle these internal rifts.

So when Theresa May revealed her "Chequers Plan" for Brexit -- a move that trampled over the positions of the rival factions in the party -- the Tory First Battalion wheeled on her, using its coordination tools to systematically attack the party leader and her signature policy position.

The Battalion contains several high-ranking members of the Conservative Campaign Headquarters, whose participation in coordinating a backstab against their own leader will doubtless increase internal divisions.

And of course, there's the fact that someone leaked the group's internal Twitter messages to Buzzfeed -- backstabbing the backstabbers.

Tory MPs often complain that their social media operation is nowhere near as effective of that of Labour or Momentum, the pro-Corbyn grassroots network that supports it. One of the first things Brandon Lewis promised to do when he became Tory chairman in January was to “take the fight to Labour” online.

These Leaked Messages Show How Tory HQ Used A Twitter Army To Attack Jeremy Corbyn. But They Turned On Theresa May Instead [Alex Spence/Buzzfeed]