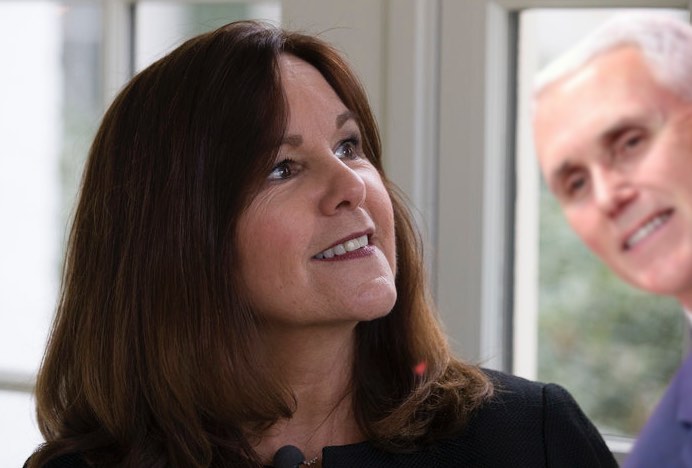 Karen Pence, wife of Vice President Mike Pence, just started a new job this week. She's an art teacher at a Christian school that makes job candidates sign a pledge not to engage in homosexual activity. Gay kids, you're not welcome either.

The Pences are nothing if not consistent. Consistently horrible.

Huffington Post's Rebecca Klein reports that the school where Pence now works discriminates against LGBTQ people in its job application, and doesn't want any queer kids around, either.

Immanuel Christian School in Northern Virginia makes it clear right in their online application [PDF] and job application form [PDF] that they don't welcome everyone.

In a “parent agreement” posted online, the school says it will refuse admission to students who participate in or condone homosexual activity. The 2018 employment application also makes candidates sign a pledge not to engage in homosexual activity or violate the “unique roles of male and female.”

“Moral misconduct which violates the bona fide occupational qualifications for employees includes, but is not limited to, such behaviors as the following: heterosexual activity outside of marriage (e.g., premarital sex, cohabitation, extramarital sex), homosexual or lesbian sexual activity, polygamy, transgender identity, any other violation of the unique roles of male and female, sexual harassment, use or viewing of pornographic material or websites,” says the application.

The application says that the school believes “marriage unites one man and one woman” and that “a wife is commanded to submit to her husband as the church submits to Christ.” The application asks potential employees to explain their view of the “creation/evolution debate.”

The “parent agreement” asks parents to cooperate in its “biblical morality” policy. Under this policy, parents are to acknowledge the sanctity of marriage as a strictly heterosexual practice. Families who condone, practice or support “sexual immorality, homosexual activity or bi-sexual activity” go against the principles of the school, per the document.

What a load of crap.

Update: the school also bans LGBTQ students. In a "parent agreement" document, parents are to acknowledge that condoning, practicing or supporting “sexual immorality, homosexual activity or bi-sexual activity” goes against the schoolhttps://t.co/mT4mOssnEv