Megachurch Pastor Hope Carpenter: 'I cut people. I got a knife right in that pocketbook.' 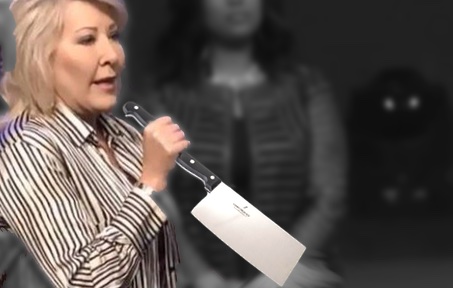 “I cut people. I got a knife right in that pocketbook,” Carpenter said, gesturing toward her seat.

I don't recall anything in the Bible about 'I cut people,' but perhaps I missed a page. Those were the words this megachurch preacher is now famous for saying -- and you'll never believe who she was targeting.

“Pastor Hope Carpenter called out the Greenville News during a sermon at her former church, Relentless Church, in Greenville, S.C., on March 31.”

“I cut people. I got a knife right in that pocketbook,” Carpenter said, gesturing toward her seat. “Greenville News, come on. We done went through this. I’m still here, and guess who else is still going to be here?” She pointed to John Gray, who nodded in agreement.

The crowd roared once again.

The apparent threat toward the Greenville News, a daily newspaper, comes after the outlet published several stories casting a negative light on the Grays. In December, for example, the outlet reported on John Gray’s purchase of a $200,000 Lamborghini as an anniversary present for his wife. In a tearful Facebook Live video, the pastor maintained he used “not a nickel, not a penny” of church funds to buy the car.

In January, the paper published a story after a reader tip revealed Gray was living in a home worth $1.8 million funded by Relentless Church. Officials at the church told Greenville News the home was included in a compensation package for the pastor, adding, “This is a practice that is done with every denomination in the nation.”

Then, in late March, John Gray asked churchgoers to help bankroll a $250,000 repair to the church’s roof. Gray told his congregation that the church was millions of dollars in debt, Greenville News reported, and suggested the money could be raised easily if 2,500 people gave $100.

He offered to pay $300 himself, but reportedly gave those in attendance a deadline of April 3 to raise the rest of the money.

Read the whole story: ‘I cut people,’ a megachurch pastor threatened as she preached. Her target? The local newspaper.

*NOTE* IN CASE IT IS NOT OBVIOUS, THE IMAGE IN THIS BLOG POST IS A PHOTOSHOPPED INTERNET VISUAL JOKE OF SORTS, SHE WAS NOT LITERALLY CARRYING A GIANT MEAT CLEAVER AROUND WHILE PREACHING. THANK YOU.

Below, the pastor's response.

Who’s report will we believe? The doctors? The critics? The naysayers? The slanderers? The haters? The credit report?? NO!!!!! We will believe what God says about us! If you are discouraged today, Get into Gods Word to see what He says about you!