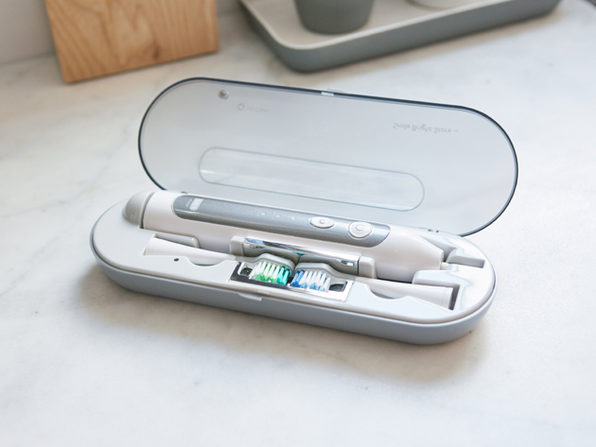 Ever wonder if you're cleaning your teeth well enough? If your last dentist visit has you getting a little more thorough about oral care, it might be time to save yourself some guesswork. A lot of electric toothbrushes promise deep cleaning, but there's a Platinum Sonic Toothbrush that has power plus the simple but effective innovation of a timer to make sure you're brushing for the right amount of time, every time.

And that's the least of the bells and whistles. It charges by USB, which makes it perfect for travel. Plus, the case has a UV sanitizer which kills up to 99% of bacteria on the brush head while it's charging. Turn the power on, and the Platinum Sonic vibrates at 40,000 brush strokes per minute, which not only loosens fine particles from the teeth but is great for the gums. And best of all, there's an Auto Timer that makes sure you're brushing for the ADA-recommended two minutes. It's like having a dentist on the room with you, minus the guilt.

The Platinum Sonic Toothbrush & USB Sanitizing Case are currently $49.99, a full 80% off the MSRP.