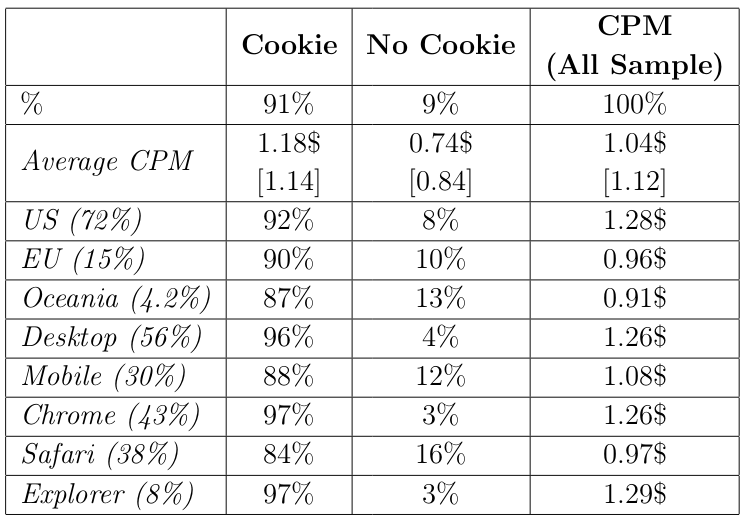 In Online Tracking and Publishers' Revenues: An Empirical Analysis, a trio of researchers from U Minnesota, UC Irvine and CMU report out their findings from a wide-ranging (millions of data-points) study of the additional revenues generated by behaviorally targeted ads (of the sort sold by Facebook and Google) versus traditional, content-based advertising (that is, advertising a piano to you because I spied on you when you searched for pianos yesterday, versus showing you an ad about pianos next to an article about pianos).

They found that despite the 40% "ad-tech" premium charged by behavioral ad companies, the ads only added about 4% the media companies that published them, meaning that behavioral advertising is a losing proposition. What's more, serving behaviorally targeted ads involves a great deal of expense in the form of compliance and liability, numbers that will only go up as more privacy laws are enacted.


This reveals that the boastful claims that Big Tech makes about its flagship products are not very true. This has always struck me as likely — when everything else they say about their behavior, ethics and priorities turns out to be a lie, why would we expect their sales literature to be uniquely truthful?


The study's method was quite simple: the researchers compared the amounts that publishers received when a logged-in user with a tracking cookie visited their pages to the revenues that an anonymous, logged-out user generated, based on the content of the page and non-tracking indicators like location and operating system.


Ad companies have always done their best selling with ad buyers, not the public to whom ads were shown (think of Wanamaker's infamous quip that "Half the money I spend on advertising is wasted; the trouble is I don't know which half" and then realize how good his ad agency had to have been to convince him that only half the money he was spending was wasted!). And the fact that many businesses are buying a service is not a reliable indicator of whether that service is worth it — think of the wealthy, powerful people who put their fortunes in the hands of private equity managers whose picks underperform relative to a simple, low-load index fund.


In the meantime, surveillance imposes enormous external costs on society, from identity theft from breaches to abetting state surveillance (remember, the majority of government surveillance takes the form of raiding, stealing or buying data gathered by commercial outfits).

Our findings so far suggest that when the user's cookie is available, publisher's revenue increases – but the increase is just about 4%. This corresponds to an average increase of $0.00008 per advertisement. While the increase is significant from a statistical perspective, itmay be useful to consider its economic significance. Consider a website with 500,000 sessions per day. Average number of page-views per session is 2 and average number of ads shown oneach page is 4. In total, the website shows (sells) an average of 4,000,000 ads per day. If the website had to decide to not set tracking cookies on the visitors, according to our estimate, it would forfeit about $320 in revenue per day, or almost $10,000 per month. If setting tracking cookies on visitors was cost free, the website would definitely be losing money. However, the widespread use of tracking cookies – and, more broadly, the practice of tracking users online– has been raising privacy concerns that have led to the adoption of stringent regulations, in particular in the European Union. Privacy regulations put into place specific requirements and provisions pertaining to the processing of personally identifiable information (personal data) of individuals; as such, they require websites and, more generally, companies that collect, store, and manage consumers' information, to put in place appropriate technical and organizational measures that ensure the compliance with such requirements. Nevertheless, such measures come at a cost and sometimes a prohibitive one.