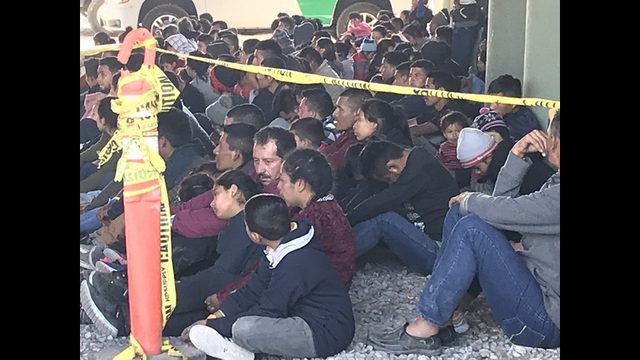 Migrants detained by federal agents under a bridge in El Paso, TX, in March 2019.

One thousand more single migrant adults are being detained by U.S. border protection each week in 2019, with the detention system at "serious risk of exceeding safety standards on a regular basis," documents reported today by Newsweek show.

Newsweek's story reports on a previously undisclosed letter that details how U.S. Department of Homeland Security (DHS) agencies have taken "extraordinary measures" to thwart the sudden overcrowding in the detention system, and are at "serious risk of exceeding safety standards on a regular basis."

The cause for the crisis, the officials say: growing numbers of arriving migrants.

"As of today, CBP has over 8,000 single adults in custody," a DHS official wrote on May 9 to officials at the Pentagon.

Newsweek's James LaPorta James LaPorta tweets, “The documents also provide a breakdown of where bed space is needed at detention facilities at the southwest border: Texas and Arizona: 6,000 in Texas; 1,500 in Arizona.”

"ICE is currently holding more than 50,000 aliens in custody and no longer has the capacity to intake any more single adults," DHS wrote. "CBP facilities nationwide are outdated, overcrowded and suffering from a lack of sufficient investment."

In response, Department of Homeland security (DHS) officials have taken the unprecedented step of having industrial-style tents constructed to facilitate the transfer of migrants out of overcrowded facilities along the southern border.

In a previously undisclosed letter to the Pentagon, Department of Homeland Security (DHS) officials detail how their agencies have taken "extraordinary measures" to alleviate overcrowding in the detention system and are at "serious risk of exceeding safety standards on a regular basis," caused by growing numbers of arriving migrants, particularly families, and poor allocation of resources at the border.

When DHS, which oversees both CBP and Immigration and Customs Enforcement (ICE), sent the letter last month, CBP was detaining 8,000 single adult migrants in its facilities in addition to 9,000 unaccompanied migrant children and family members.

Over the last three months, CBP apprehended at least 7,000 single adults every week at the U.S.-Mexico border, according to agency statistics. And the number of apprehensions in May was nearly double that in January. The discrepancy in the numbers of single adult migrants apprehended and detained each week is because CBP routinely transfers its detainees to other agencies, such as ICE.