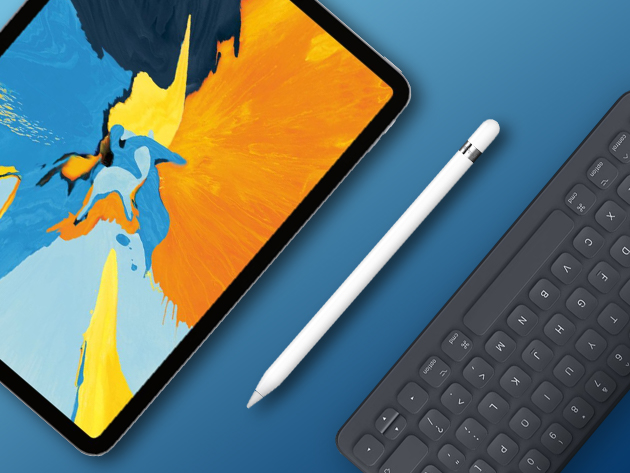 Looking for a new tablet? If you haven't upgraded in a while, it might be time to check out the latest iPad Pro for two very good reasons. First, the 2018 model is a real workhorse. The 12X Bionic chip processor means it can handle any task you set out for it, and still have plenty of speed left over for gaming or streaming video (which both look great on the liquid retina display). Not to mention great new features like Face ID and a magnetic Apple Pencil mount which also charges up that peripheral.

The second reason? If you're feeling lucky, you could get one for free.

Sign up below and you'll be eligible for a free iPad Pro, plus an Apple Pencil and Smart Keyboard. That's everything you need to make this versatile piece of hardware your new workstation.

No need to wait for your lucky number to come up, though. As new iPads hit the market, there are tons of refurbished models popping up. Here are a few of the greatest hits we found from Apple's tablet line, all priced to move:

There's nothing like the classics. The flagship tablet in Apple's fleet is still the perfect size for a range of uses, including gaming and live chat. Even the older 2012 models pack plenty of storage for photos and video, and the iPad 5's screen was a definite step up that showed off the possibilities of its 8MP iSight camera.

When the Mini was released in 2012, it was seen as the perfect traveling companion. Today, that's still the case. Its 7.9" screen makes it more portable than a laptop or most tablets, but bigger by far than your smartphone. That meant more opportunities to stream video or knock out a few levels of Candy Crush on your commute, while still being able to fit the device into a good-sized fanny pack. The addition of the retina screen on the Mini 2 only enhanced those experiences, and it's always been an underrated work tablet with the addition of a Bluetooth keyboard.

There are some steals on refurbished Mini units below, many of which feature more than enough storage for all your files and films (128 GB).

This skinny cousin to the Mini one-upped that tiny tablet in terms of weight and sleek design, and we're stoked now that Apple brought the iPad Air back this spring. You knew it wasn't going to stay dead for long. With solid battery life, a full retina display and an intuitive 8MP back camera, this refurbed first-gen model is still a reliable device around the house or on the road. Save over 50% on this certified refurbished iPad Air.

Portability has always been an iPad hallmark, but the iPad Pro line is just hefty enough - both in size and in power - to let you know it can do anything a full-scale laptop can do - and in some cases do it better. The processing power on these tablets was like nothing that came before, making it a great work-from-anywhere option. Meanwhile, the 12MP cameras on the later models made you want to take the day off and shoot entire feature films with the thing. No matter what you're using it for, these retooled Pros are just the ticket.