The magic theatre of High Weirdness 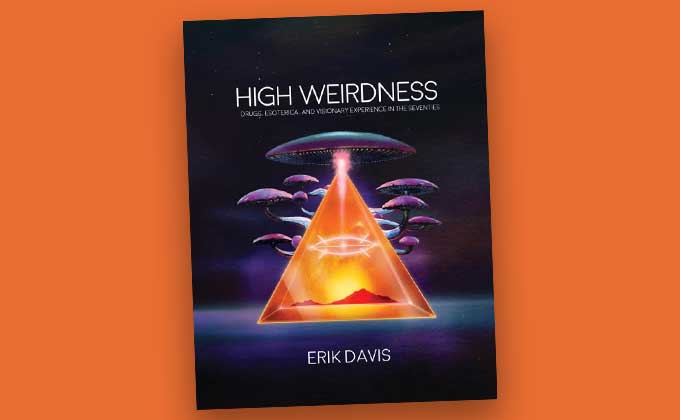 In Hermann Hesse's novel Steppenwolf we visit a mysterious and strange magic theatre, where some pretty weird things happen. Meant for madmen and madwomen only, the price of admission is nothing less than one's mind. In High Weirdness, you are invited to enter another kind of magic theatre. It is a place of magic and madness, heaven and hell, beauty and terror. Luckily, the price of the ticket is not your sanity, but just the price of the book, High Weirdness, the latest literary exploration by Erik Davis.

A long-time Boing Boing pal, Erik Davis is an intellectual of the highest caliber: a persuasive and provocative essayist, an erudite and unconventional scholar of religions, a charismatic and engaging speaker, an adventurous-minded tripster and all-around experienced explorer of the edges of our reality. Davis is one of the most admired and refined interpreters of all matters mystical, psychedelic and occult. His decades' long travels in hyper-reality—roaming seamlessly from musical festivals to Burning Man to academia—make him a uniquely qualified cyber-anthropologist, a keen observer of our contemporary and turbulent cross-cultural mazes of techno-mystical realms, fringe subcultures, neo-shamanic practices, pop mythologies, conspiracy theories, and spiritual impulses. For those who arrived late to Erik Davis' extensive body of work, let me single out three important contributions: his classic (and still  relevant) read Techgnosis; his musical hermeneutic homage to the Led Zeppelin IV album; and his podcast, a cornucopia of weekly interviews with artists, intellectuals and all sorts of weirdos, all concerned with the cultures of consciousness.

High Weirdness can be seen, in part, as a playful assault on reality, which, after all, is a complicated business. We all go through life, trying to make sense of things, navigating a so-called "consensus reality." Our very notion and understanding of what "reality" is (and, as a consequence, our own experience of it) is dependent and mediated by an existing matrix of institutions and cultural frameworks. These frameworks filter, shape and organize the world through shared and enforced patterns of perception, signification, and conceptual organization. In other words, whatever we ultimately come to believe to be possible, real, legitimate, or reasonable is a function of these structural mediations at play. We are all subject—more than we are generally able to acknowledge—to what our culture has programmed us to believe about the way things are and how the world works. However useful and necessary these structures and frameworks are, they are too limited, flawed, and incomplete to encompass of the whole spectrum of reality. To paraphrase a famous Aldous Huxley piece: every individual is at once the beneficiary and the victim of the consensus reality into which s/he has been born. We are beneficiaries inasmuch it allows us to build a coherent and useful model of reality; we are victims in so far we believe that this reduced awareness and understanding of reality is the only thing there is. The point is: there are more things in heaven and earth than are dreamt of in our philosophy. And sometimes, weird shit just happens: the rug is pulled from under our feet, our known terrain and categories won't work anymore, and our familiar consensus reality threatens to crumble to pieces. We are not in Kansas anymore. We are entering the space of high weirdness, which can include intensely bizarre and extraordinary experience, paranormal phenomena, overwhelming synchronicities, extraterrestrials communication and direct encounters with nonhuman entities, mystical seizures, occult effects, and psychedelic experiences.

Whenever faced first-hand, such anomalous experiences are ontologically confusing, potentially disturbing, and unnerving. They deeply shake our very model of reality, our beliefs about the nature of consciousness and the physical cosmos itself. Inherently ambivalent and paradoxical, high weirdness events have a peculiar mix of sacred and profane elements, both alluring and scary, terrifying and blissful, a blessing and a curse.

Trying to dismiss these "perturbations in the reality field" (as Philip K. Dick called them) as mere glitches, or hallucinations, or delusions, or pathological conditions is a shallow oversimplification. The stale rhetoric of rationalism and materialism falls short in providing satisfying answers or sustainable explanations concerning these enigmatic and compelling events.

High weirdness is a kind of incandescent magma running underneath the quiet crust of our ordinary consensus reality: be it by mere accident, or disciplined training, or intentional ingestion of psychoactive compounds, high weirdness can erupt into one's life—potentially everybody's life—with an unannounced and unpredictable degree of power.

Davis's book High Weirdness - Drugs, Esoterica, and Visionary Experience In The Seventies is the literary equivalent of the Voyager spacecraft launched into outer space in 1977: it is a literary probe propelled into fringes of the space within, the "here be dragons" zones of the inner mindscape. A hefty, lavish, philosophically stirring tome, High Weirdness analyzes and juxtaposes super wild stories of three seventies' mavericks of the mind, heroes of the imagination, and quintessential weirdos: the psychedelic bard and raconteur Terence McKenna, the cosmic jester and pop-philosopher Robert Anton Wilson, and the science fiction gnostic visionary Philip K Dick. With the '70s California milieu as their common petri dish, these writers went to the far edge of their reality, peeked into the abyss, wrestled with their own extreme bouts of high weirdness, and brought back mesmerizing and intriguing reports of their out-of-this-world encounters.

Davis deconstructs and recombines their stories, handling this very slippery and elusive materia prima, with the rigor of a scholar, the openness and curiosity of a true skeptic, and the playfulness and irony of a Zen master. With his mercurial language prowess, he unscrews the bolts that keep our rational world-view together, and through the cracks, we can glimpse flashes, and sometimes blazing beams, of weirdness.

High Weirdness is a gourmet meta-literary mind-fuck, a pragmatic user manual, a cautionary tale of the sublime and blissful heights, as well as the transpersonal terrors, that are in store for those who dare to dance in Weirdland. Once the cat is out of the bag, all bets are off. Read at your own risk. Perhaps the price of admission is just the cost of a book... or, maybe, it will be your mind after all.