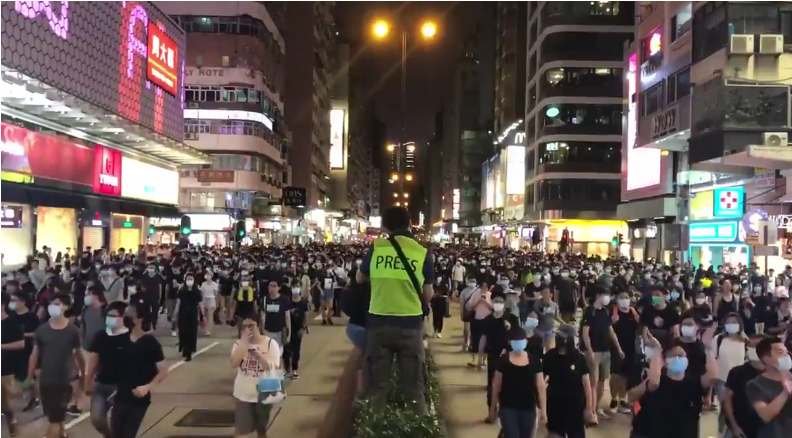 In early June, protesters surged into Hong Kong's streets to protest a change to the country's extradition rules that would allow the Chinese state to demand the extradition of political dissidents to the mainland; as the protests grew, Hong Kong's puppet government had no choice but to withdraw its proposal -- but that wasn't enough, and millions of people poured into the streets, demanding the resignation of administrator Connie Lam and the release of imprisoned demonstrators.

The protests are not abating: ever-larger crowds are packing the streets, staging careful and measured acts of vandalism whose delightful details made them darlings of popular sentiment.

The state has seized on the vandalism as a pretense for a militarized crackdown, which has not kept the protesters down but it has moved public sentiment -- in favor of the protesters, who continue to demand the executive's resignation.

Sum Lai, a 53-year-old housewife and mother of two, said those who condemned the youngsters for vandalising the Legco building did not understand them.

“Did the government even raise an eyebrow when a million or 2 million people took to the streets?” she said, referring to two mass rallies in June. “The young people didn’t want to storm Legco but the government was pushing them too hard.”

After organisers announced the end of the protest at around 7.30pm, hundreds continued to linger outside West Kowloon station, while hundreds more spilled out onto Canton Road again, saying they were “going shopping”.

They taunted and abused police officers trying to reopen the road, targeting and surrounding Chief Superintendent Rupert Dover in particular as one of the commanders on the ground when tear gas was first used against extradition bill protesters on June 12.

Dover was hounded by the protesters until he left the scene in a police vehicle, after which pockets of demonstrators continued to stray onto nearby roads.

Six full lanes on Nathan Road have been occupied by marchers in #HongKong, who started a second march after the official march against the #extraditionbill in Kowloon this afternoon was over pic.twitter.com/0dVtnQt5pc