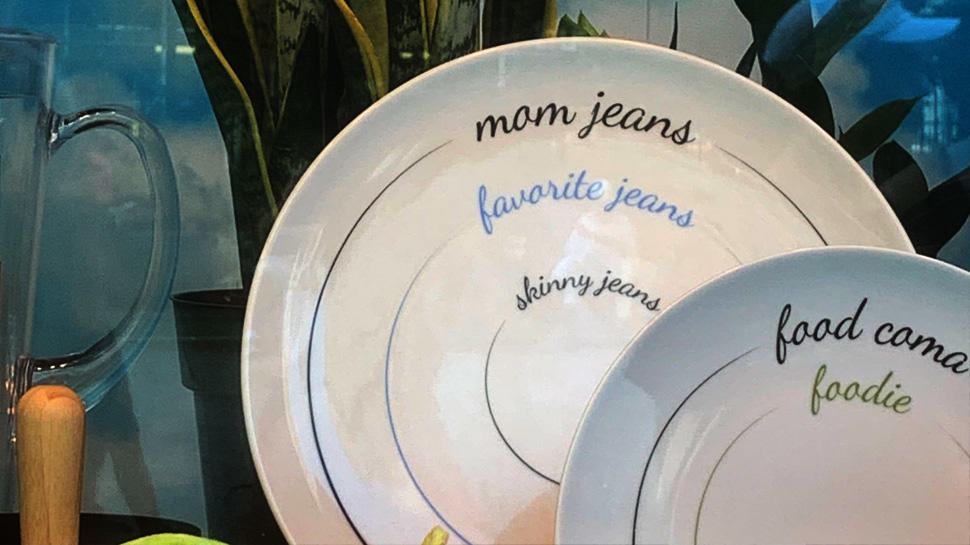 Novelty plates marked "mom jeans" "favorite jeans," and "skinny jeans" have been yanked off of Macy's store shelves after people criticized the company for being fat-shaming jerks. Ok, maybe Macy's wasn't called that exactly but critics did claim these controversial "portion-control" plates carry a body-shaming message for women.

Alie Ward, a writer and podcast host, ignited the conversation after she tagged Macy’s in a tweet on Sunday. “How can I get these plates from @Macys banned in all 50 states,” she wrote beside a photo she took of the dishes in a display at the Macy’s flagship store in New York City...

Within hours, Macy’s had reached out to Ward on Twitter, letting her know that they would be pulling the product as soon as possible. “Hi, Alie — we appreciate you sharing this with us and agree that we missed the mark on this product,” Macy’s wrote. “It will be removed from all STORY at Macy’s locations.”

STORY at Macy’s is a brick-and-mortar retail initiative in which small businesses are given space in-store to sell their products that follow a certain theme. The plates, created by a company called Pourtions, were for sale in STORY at Macy’s. They were never available online on the Macy’s website.

Hi, Alie — we appreciate you sharing this with us and agree that we missed the mark on this product. It will be removed from all STORY at Macy's locations.

The plates are still available at the Pourtions website. They claim their entire collection is a "humorous + healthy way to watch what you eat + drink."

Walk down any street today and one thing becomes immediately clear: we have really let ourselves go. Waistlines are exploding like the national debt. Arteries are jammed like Grand Central Station at rush hour. And there are plenty of helpings of blame to go around — fast food, slow metabolism, excessive elbow-bending, and portion sizes that have increased exponentially.

So, pull up a chair and meet POURTIONS™ —unique cocktail, dinner and partyware. Every day of the week, our collections will provide a hip, humorous, and healthy reminder to watch how much you eat and drink. Whether feeding a family of four, or concocting an “in” drink for your friends, POURTIONS will keep you smiling—and keep you from overindulging.

The Sacklers (previously) are a reclusive, super-secretive family of billionaires whose fortune comes from their pharmaceutical company, Purdue Pharmaceuticals, manufacturers of Oxycontin, the drug at the center of the opioid epidemic, which has claimed more American lives than the Vietnam war, with the death-toll still mounting.

Kids are bigger bullies in counties that voted for the incoherent mobster. NPR reports: After the 2016 presidential election, teachers across the country reported they were seeing increased name-calling and bullying in their classrooms. Now, research shows that those stories — at least in one state — are confirmed by student surveys. Francis Huang of […]