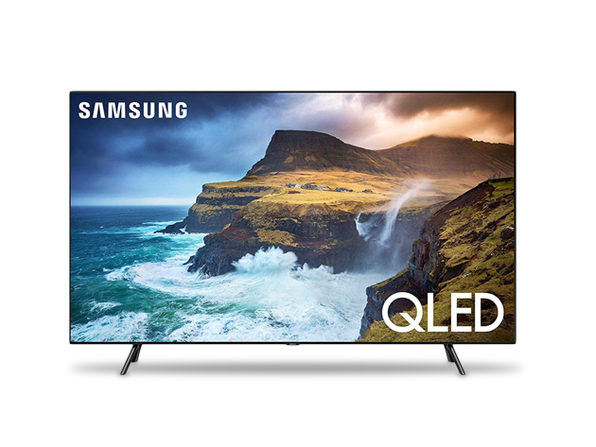 Your binge-watching options just got a lot more interesting. Get ready to be the first choice venue for movie night, because there's a giveaway right now on a Samsung 65" QLED 4K Smart TV.

Size isn't quite everything for this theater-quality set, though it is impressive. The Q70 series TV is able to upscale even older games and movies to 4K quality, and it's fully compatible with major voice assistants like Amazon's Alexa and Google Home.

All you need to do is register here, and you'll be eligible to win the TV, free and clear.

Too good to be true? Suit yourself. While you're sipping that half-empty glass, here are a few deals that will allow you to pay actual money for some great video technology, albeit at a heavy discount:

Fill in that blind spot in your TV diet with free network channels, thanks to this new school unit that picks up local and national stations the old fashioned way, up to 50 miles from broadcast antennas. The best part: It broadcasts them in HD. The Rveal Digital Indoor HDTV Antenna is on sale for $19.99, more than 30% off the list price.

This ultra-thin set made Consumer Reports' list of top 4K TVs for 2018, thanks to its α7 intelligent processor and Dolby Atmos sound. It's also controllable with Alexa or Google Home for full smart home integration. The LG B8 Series 55" OLED 4K HDR TV is now $1199.99, down from the previous sale price of $1553.99 and a full 47% off the retail price.

Make your next round of "Super Smash Bros. Ultimate" into a party with this projector specifically designed for the Switch. It can project the game screen onto any surface up to 120" across, with sound augmented by its own 2-watt speakers. Pick up the AAXA S1 Mini Projector for Nintendo Switch for $289, 7% off the original cost.

They're able to carry more power and deliver it at double the transfer speed, so why wouldn't you want to use USB-C? Especially these cables, which boast a gold-plated connector and premium alloy casing. Get the CHOETECH USB-C To HDMI Cable for $16.99, a 5% discount off the MSRP.

This all-in-one projector doesn't just throw up movies up onto a 12-foot screen from your own device. It also serves as its own media player, able to stream and download content from Amazon, Netflix or elsewhere. Grab this CINEMOOD Portable Movie Projector for $349, more than 10% off the retail price.

Stop fiddling with your audio levels and hook up this automatic equalizer, designed to raise and clarify TV dialogue while re-mastering the entire spectrum of audio from your TV, in real-time. The Aftermaster Pro Personal Audio Device is now $164.95, an 8% drop off the regular cost.