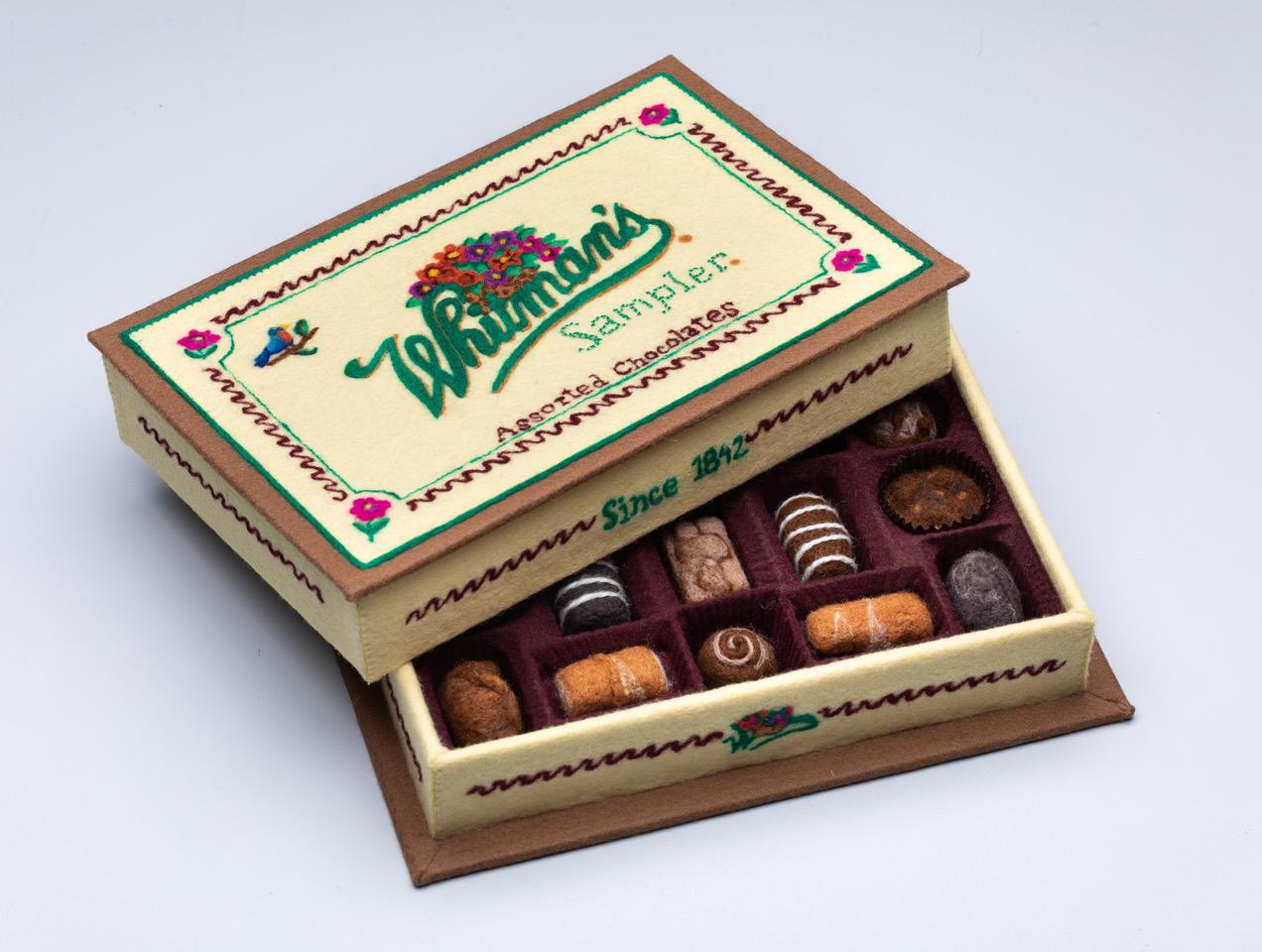 During a recent stopover in Portland, Oregon, it was delightful to once again hang out with the "Duchess of Felt," artist LeBrie Rich.

Not only do I adore her, but I adore her work. The needle-felted and stitched sculptures of products she makes are what really capture my attention. Case in point: that Whitman's Sampler that looks good enough to eat! She told me creating it was a "mad undertaking" of over two months, "especially the logo with the flower basket."

LeBrie is currently exhibiting 15 new pieces -- all of candy packaging -- at a show called Sugar Spin. If you're in the Portland, Oregon area, you can check it out until October 30 at COLAB Architecture + Urban Design. On Tuesday, September 17, you can also catch her Artist's Talk at the show's space from 5 p.m. to 7 p.m.

Her artist statement for the show:

When I tell people my latest work is about candy, the memories pour out unsolicited. “I got a Whitman’s sampler box for my first valentines gift and kept all my love notes in it - I still have it!” “As a kid I once got Jujubes at the movies and was so disappointed with their soapy, flavorlessness that I spent the entire film regretting my choice.” “My brother had an appendectomy when I was 5 and someone brought him a carton of Whoppers at the hospital. I spent the drive home eating the whole carton of Whoppers in the back seat, hearing them clank around in the carton, opening and closing the paper spout. It was ecstasy.”

(That last one was mine).

These candies are ubiquitous – available at nearly every corner store - and yet the memories we have of Skittles and Heath bars are visceral. How interesting to have such potent, personal experiences with items that are mass produced at a global scale.

How about the packaging!? Designed and redesigned throughout the decades to be as appealing as possible – thousands of hours of human creativity put into making these logos iconic and desirable. Abba Zabba. Kit Kat. Sugar Babies.

To me, these products represent pleasure, desire, and corporate seduction. Taking the time to slow down and trying to recreate each piece as beautifully as possible is my investigation into what it means to be human in an era of industrial sameness.

P.S. She also teaches classes out of her Portland-based studio, PenFelt.