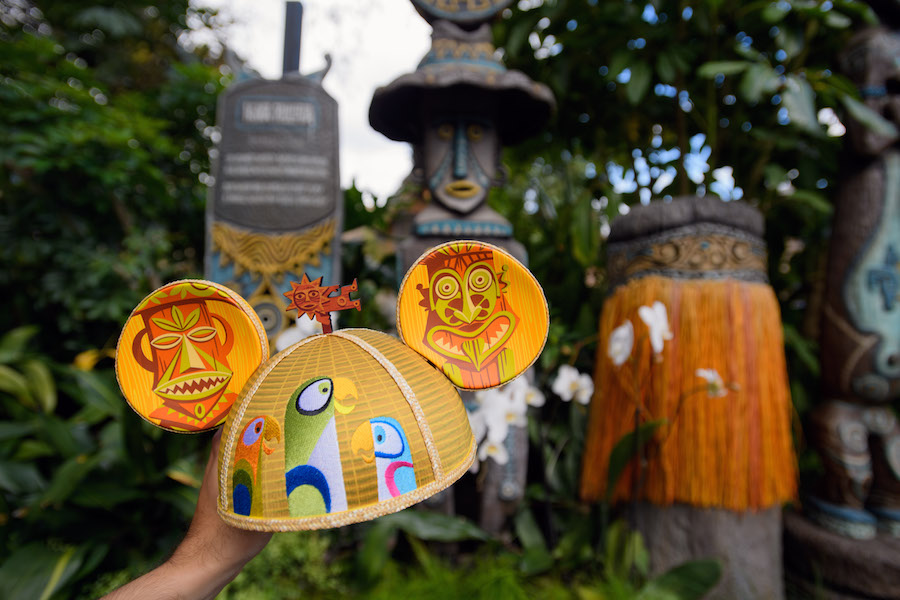 Look what SHAG whipped up (that's a reference to the Dole Whip, btw) for Disneyland: Enchanted Tiki Room mouse ears. Since early July, Disney has been releasing a series of Mickey Mouse ear hats and Minnie Mouse ear headbands designed by notable celebrities, designers, and artists. Photos of the other designs and their release dates can be found on the Disney Parks Blog.

I’ll be signing these and other exclusive Disney products at D23 on Saturday, August 24 from 2:00 to 3:30 pm at Talent Central in the Anaheim Convention Center. These limited edition Enchanted Tiki Room Mouse Ears are part of Disney’s Designer Collection, featuring ear hats by Betsey Johnson, Vera Wang, Heidi Klum and other celebrity artists and designers. Mine are debuting at D23 and will be available at Disneyland and Disney World on August 28.

Skip through the images to see the back of the ears:

I’ll be signing these and other exclusive Disney products at D23 on Saturday, August 24 from 2:00 to 3:30 pm at Talent Central in the Anaheim Convention Center. These limited edition Enchanted Tiki Room Mouse Ears are part of Disney’s Designer Collection, featuring ear hats by Betsey Johnson, Vera Wang, Heidi Klum and other celebrity artists and designers. Mine are debuting at D23 and will be available at Disneyland and Disney World on August 28. @disneyd23 #enchantedtikiears #enchantedtikiroomears #enchantedtikiroom #waltdisneysenchantedtikiroom

As you're probably aware, this is just one of the many groovy products he's designed for them over the years.

While you're here, take a gander at what he's created recently for the Haunted Mansion's 50th anniversary:

Disneyland’s Haunted Mansion is celebrating its 50th Anniversary this week. I’ve designed art and merchandise for the VIP events on August 7th and 8th, after which they will be available to the public, but Disney hasn’t clued me in to those details so you’ll have to do some digging to find out purchasing information. @shopharveys has created two haunted handbags, and I’ve designed a Haunted Mansion Aloha Shirt, limited edition prints, as well as other ghoulish goodies. #hauntedmansionanniversary #hauntedmansion50thanniversary #hauntedmansion50thanniversary

I missed the opening of Star Wars: Rise of the Resistance by a few weeks. Star Wars Galaxys Edge is wonderful. OC Register: On most days, the backup boarding group threshold tends to be in the 80 to 83 range, meaning visitors with boarding groups below that number are expected to get on the ride. […]