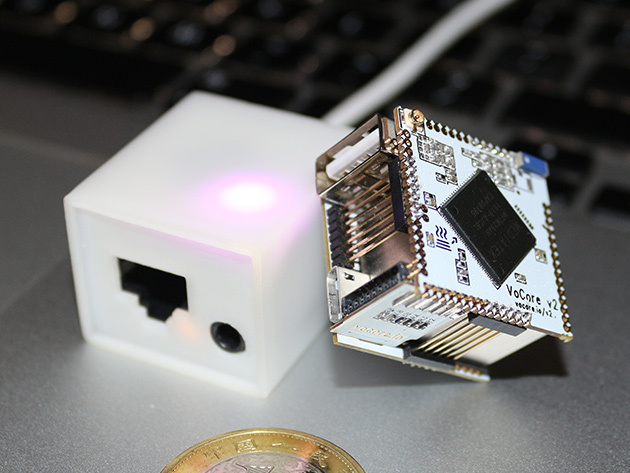 If there's one thing that stayed consistent through the last decade or so of tech industry turmoil, it's the love affair between techies and Linux. There's just a ton you can do with the OS, and its open-source format means you can customize your rig from the ground up.

Apparently not content with that level of devotion, the good folks at VoCore have gone and made a tiny Linux computer that is impossibly cute, on top of its multiple applications.

The VoCore2 Mini Linux Computer packs a wireless router and 16M of onboard storage into a cube about the size of a coin. Just hook it up to any display monitor through a standard USB2.0 port, and you're ready to put it to work. With 128MB of DDR2 memory and an MT7628AN MIPS processor, it's equally useful as a streaming station, VPN gateway, data storage - you name it.

The standard VoCore2 package comes with an Ultimate Dock that takes MicroSD cards for $42.99 - a full 14% off the list price. For those who want to get cracking right out of the box, there's a VoCore2 Mini Linux Computer Bundle for $69 (a 13% discount), including an 800 X 480 screen just perfect for the tiny powerhouse.