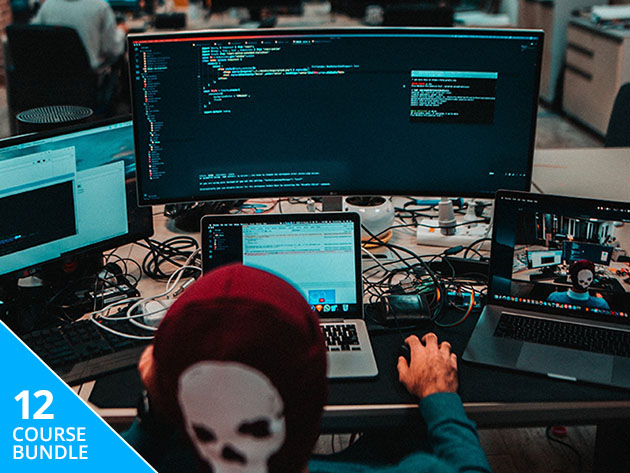 There's a great deal of opportunity out there in the tech world and an increasing amount of competition. So you know your way around Python? Great. So do a lot of other coders, and they've probably got Java, C++, and SQL on their resumes to boot. A career in programming requires up to date knowledge on a wide slate of languages.

Luckily, there's no need to jump between dozens of books and tutorials to get full stack know-how. The Complete Computer Programmer Super Bundle is just what it says: A complete boot camp on all the major programming languages and their real-world applications.

Of course, there's plenty of attention paid to Python in this package of 12 online courses. Along with a complete primer for beginners, you'll get a class that gives you a bird's eye visual of the algorithms and massive data sets you can build and maintain - not just with Python but with any language. There's also a complete cybersecurity tutorial that drills down on Python's uses as a security scanner.

Front-end programmers will know their way around Java and Javascript by the end of the bundle. A basic course will have you constructing and debugging your own site or mobile app by the end of ten hours, while a tester's Java guide will let you pair it up with Selenium WebDriver or another automation framework to make any system airtight.

Object-oriented programming starts with languages like C and C++, and you can learn both here from the ground up. You'll go from fundamental operations to advanced arrays and functions in no time, and move on to a full course on C# and the .NET framework - essentials for any big data network.

Launch deep learning structures with Linux Command Line, learn web development with Ruby, become a data analyst with SQL. There are dedicated courses to all these languages, plus an IoT class on how to code for the Alexa voice assistant. In short, there's enough intel here to not only launch your programming career but back it up for years with a wealth of reference material.

The 12-course Complete Computer Programmer Super Bundle is now on sale for $45.