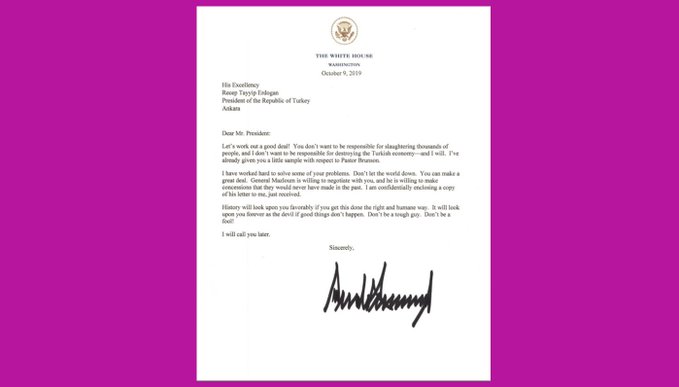 “Don't let the world down.”

“I will call you later.”

Basically he stuck some tweets on White House letterhead.

"don't let the world down."

"i will call you later."@katierogers of the @nytimes has confirmed this letter is authentic. pic.twitter.com/S6EJRojr4F

Felt the need to ask WH if this is actually real and it is. pic.twitter.com/bHyIFw6cvO

Question then becomes - was it actually sent that day (3 days after Erdogan call)?

So the letter is dated October 9, which is days after the phone call where he gives the greenlight. Then he tweets about destroying the economy as the backlash builds, and this appears to be an attempt to save face/get a re-do on the call.

The letter from Trump is dated three days after the White House released a late night statement announcing Turkey’s imminent invasion of Syria and stating that US troops would steer clear of it. https://t.co/u02dRmWhj7

DON'T BE A TOUGH GUY! DON'T BE A FOOL! I will call you later. pic.twitter.com/8JdAPEILEC

The real highlight of this letter is that it was sent a week ago — on October 9, the day the operation began, so Erdogan just completely ignored it https://t.co/Csg7t5lYFs

Trump and the guy who wrote the first draft. https://t.co/24LDUfgPbz pic.twitter.com/PwGPayd4Zz

The president says he was being sarcastic when he suggested during a White House coronavirus briefing that people should consider injecting bleach and consuming disinfectants as cure for COVID-19.