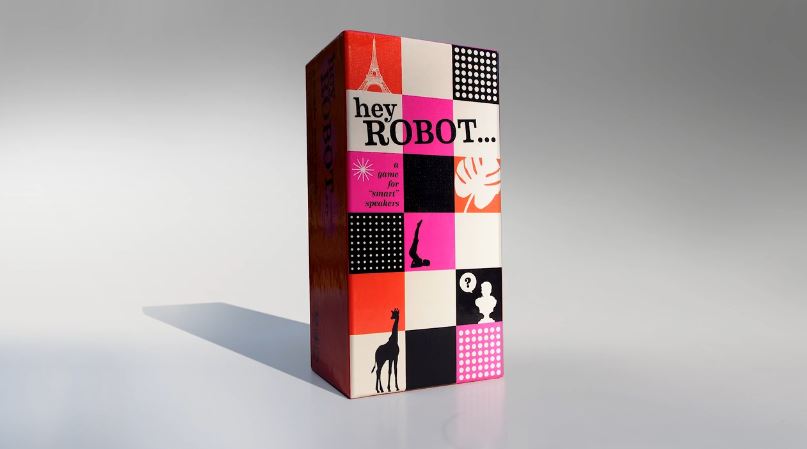 From the people who brought you Universal Paperclips and Drop 7, and highly recommended by the designer of QWOP and Getting Over It,  is an incredible marketing pitch for a new game. And the game sounds good.  Hate your Alexa or Google Home?  Think they're useless?  Hey Robot turns their shortcomings into a positive:

Hey Robot is a party game where two teams compete to get their smart speaker to say a specific word. It's a bit like Codenames or Taboo, if the friend you were playing with had an encyclopedia and was also very, very drunk. It's a hilarious, smart and strategic game for people who own a Google Home or Amazon Alexa and have no idea what the heck to do with it.

Hey Robot is created by Everybody House Games — Hilary, Mara, Frank and James Lantz. We're a family that's been making games for decades, including Universal Paperclips, Invisible Inc and Drop7. We've always been obsessed with board games and the funny ways we interact with technology in our day-to-day lives. Hey Robot is the intersection of those interests and the result of months of trying to invent fun things to do with our Alexa.

Hey Robot plays well with any group size, from 2 players up to as many people as you can fit around a flat surface.

The game is really that simple. But while the rules are easy to understand, achieving a mind meld with your Robot can take a lifetime. Alexa and Google are both the smartest and stupidest people in the room, so asking the right question in the right way requires knowledge, cleverness and strategy. When you get it right there's cheering. When you get it wrong there's laughter, because the answer is usually hilarious.

You can back the project at Kickstarter. The box currently includes this: