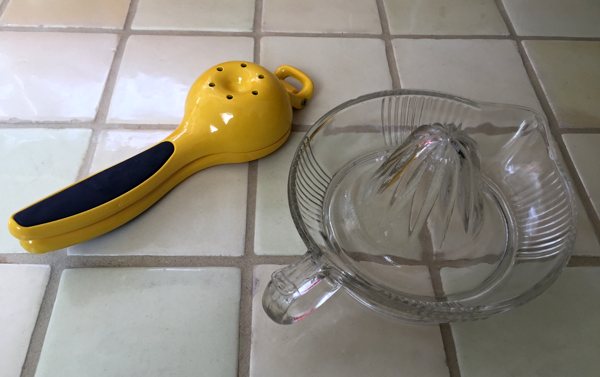 Carla didn't like the glass citrus juicer we've had for years. She said it hurt her wrist when she twisted a lemon half on the cone. I agreed with her. It's an unnatural way to move your wrist. She also didn't like having to lift out the seeds with a spoon before using the juice. Again, I couldn't argue. I told her I wanted to do some research for a good squeeze handle juicer, but I took too long so she ordered a cast aluminum juicer like this one (

It does a good job of getting almost all the juice out of a lemon, and is pretty easy to squeeze. It keeps the seeds inside the cup, too. My main concern is with the pin in the hinge. When will it break, and what kind of pin replacement will I be able use? It may not be an issue, though, because I didn't see a review where someone said the hinge pin broke.

Here's what a lemon looks like when it gets squeezed by this thing.