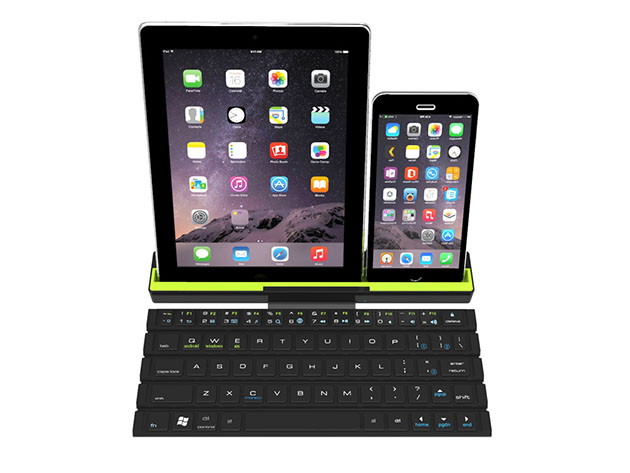 We love our smartphones and tablets, but we also love to write. For a while now, there hasn't been a workable solution. Either hook it up to a keyboard (which defeats the purpose of a portable gadget) or resign ourselves to typing on tiny, unresponsive glass icons.

Looks like technology has finally caught up to the dilemma with a decent roll-up keyboard.

The Roller Wireless Rollable Keyboard pairs up quickly and easily by Bluetooth to a tablet or smartphone. There's a cradle built-in to the design that doesn't harm the portability an ounce but makes a great mount for whichever screen you're using.

The layout for the keyboard is a full-size five-row QWERTY format, with a matte finish and raised keys that respond nicely. If you're pulling an all-nighter, never fear. The battery life can handle up to 288 hours of work. When you're done, a magnetic sensor turns the whole thing off as soon as you roll it up.

The Roller Wireless Rollable Keyboard is currently on sale for 20% off, but you can knock another 15% off the final price by using our holiday discount code MERRYSAVE15.