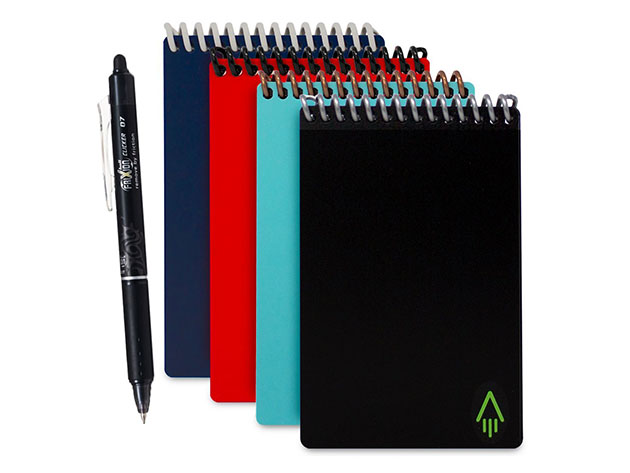 For some folks, writing notes by hand is just plain easier, but having to re-type them later can be a huge bore, not to mention time-sink.

The guys from Rocketbook successfully merged the best parts of analog and digital note-taking with their Everlast notebook awhile back. And now, that tech just got a lot more portable with their Rocketbook Everlast Mini.

If you haven't used an Everlast notebook before, here's the gist. The book is composed of specially-treated synthetic paper that you can write on with a special Pilot FriXion pen (included). It writes smoothly and without smudging but is completely erasable with a bit of water and a wipe. The Mini, true to its name, is pocket-sized, and the pen fits snugly in a holder flap.

Want to save that work? Just scan your page with the accompanying app. You can set up a variety of destination folders in all the major cloud locations like Dropbox or Google Drive, or just drop it into an email folder - all with the touch of a single icon.

A 2-pack of Rocketbook Everlast Minis is already on sale for 25% off the MSRP, but you can take an extra 15% off the final price by using the coupon code MERRYSAVE15.