Flip your flapjacks & omelets in style with this twin-skillet design 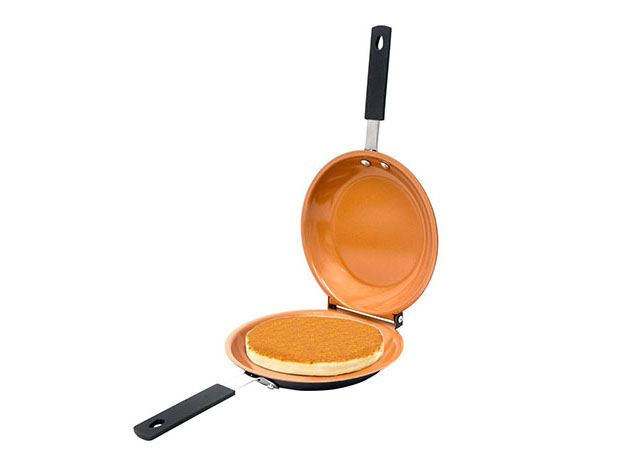 Eating pancakes and omelets? Super fun. Cleaning up afterward? Almost more trouble than its worth. Nothing makes us appreciate our mothers more than having to scrape the batter off those well-worn skillets and griddles, just like we never had to do after those magical Saturday morning breakfasts.

Now, making those breakfast treats might just be as fun as eating them thanks to the Gotham Steel Pancake Bonanza.

Be assured this company does not use the word "bonanza" lightly. Their stainless steel, specially coated twin skillet has a "double-dome" design that's particularly great at making pancakes, omelets or any number of fluffy cookie treats. Simply pour in the batter or eggs, wait a bit, then flip it over. The extra dose of radiant heat cooks your dish faster, and you've saved yourself the use of a spatula.

And possibly the use of a scrub brush, too. Thanks to the non-stick coating, you can just slide dishes right off onto your plate.

Right now, you can pick up the Gotham™ Steel Pancake Bonanza for more than 35% off the MSRP. While you're at it, get your mom one, too.