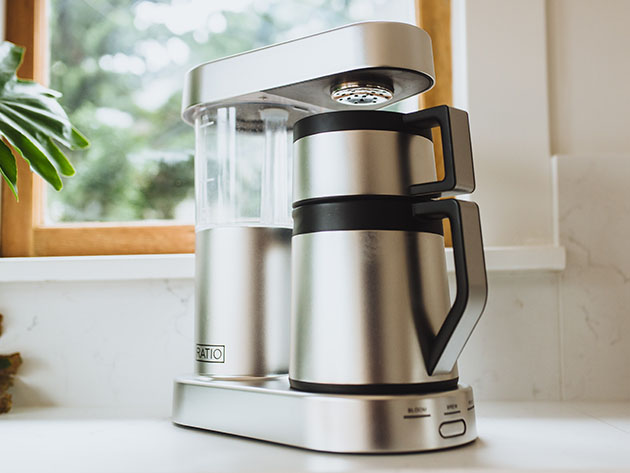 Two-thirds of American adults drink coffee every day. On average, they’re each drinking about three cups per day, which works out to nearly 400 million cups downed each and every day.

We don’t have stats on what percentage of those cups are God awfully bad, but you have to assume with so many ways to screw it up, lots of Americans are draining bad brews just to get through the day.

The Ratio Six Coffee Maker is a home brewing system funded by a Kickstarter campaign that wants to bring a world-class cup of joe with each and every pour.

Consistency and convenience without compromise are the Ratio Six rallying cry. Just add your water and grounds, then push the button. That’s it. The meticulously handmade unit kicks into action, simulating the pour-over technique of a skilled barista. Hot water is slowly dispersed over the bloom with sharp precision, offering more evenly extracted grounds and an excellent cup of coffee.

Brewing up to 40 ounces at a time, the Ratio Six looks as good as it brews, cutting a sleek stainless steel profile that helps it fit in on any countertop. The Ratio folks are also backing their quality machine with a 5-year warranty, so you know that it’s built to last.

The Ratio Six Coffee Maker is just now rolling out to Kickstarter buyers, but you can still get one now at $35 off the regular price, just $310.99. Boing Boing readers can save an additional 10% when using code RATIO10 at checkout.