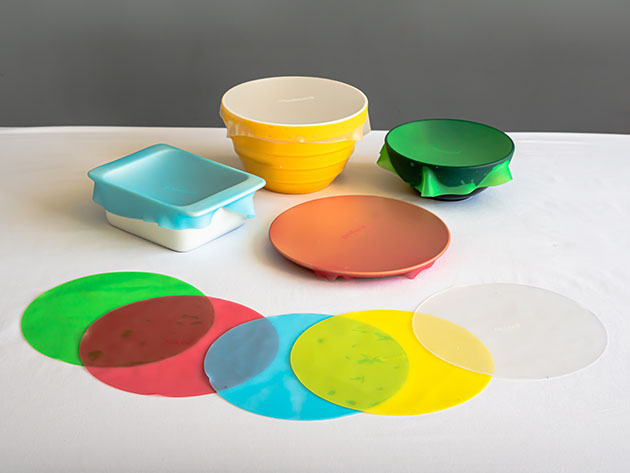 It may not rank up there with climate change or personal debt, but confess...isn’t it the worst when you’re trying to put a food container in the fridge, but can’t find the right lid to fit?

Hey, not everything has to be a global crisis to be irritating to the core. But still...it’s even more annoying when you start thinking of how easy it should be to fix this all-container, no-lid conundrum.

Apparently, modern science is tackling the big problems first because now, The Food Guard ($16.99 for a 5-piece set, 15 percent off) has arrived to solve this vexing kitchen dilemma.

The Food Guard is the one-size-fits-all fix. While it looks like a typical food wrap, it’s actually a stretchable, stackable, washable, reusable, environmentally friendly, money-saving alternative that’s so simple that it’s surprising someone hadn’t created it before.

Made from a silicon material, a 7 ½-inch Food Guard can stretch up to 3 times its normal size and clings to any container, plate, bowl, dishpan, or other storage items. The airtight seal keeps your food fresher and locks in flavor -- and when you’re done, the Guard snaps back into shape, never losing its strength or durability.

If you want to use it in the oven or microwave, no problem. It’s capable of withstanding temperatures up to 446 degrees.

With the Food Guard, you can stop sweeping the backs of your cupboards for stray lids and stop using all those plastic wraps that end up in a landfill.

Right now, you can get $3 off this five-pack including a blue, red, green, yellow and clear Food Guard for just $16.99.