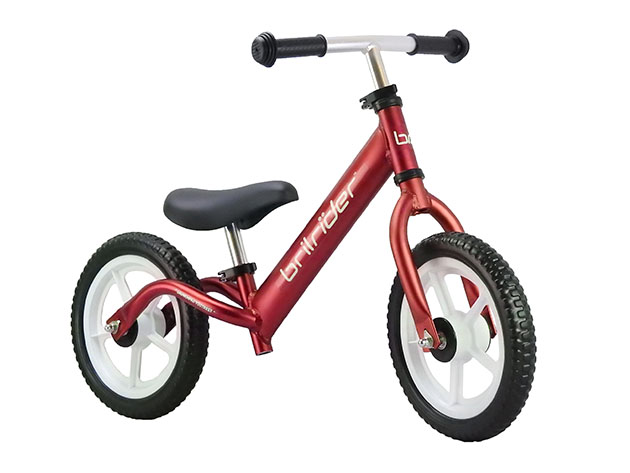 Learning to ride a bike is one of those quintessential childhood experiences that's as rewarding as it is scary. Prep your precious babe for success by starting them early with the world's lightest balance bike, the Brilrider FLIGHT.

For the uninitiated, balance bikes are no-pedal bicycles that propel forward by pushing off the ground with the feet, a la the Flintstones. Stopping, too, is accomplished by foot, which kids tend to do naturally anyway. (Hands up if you're stopping like that to this day... *raises hand*)

They're way easier for a toddler to learn than a traditional bike + training wheels setup, thanks to their uncomplicated design that eliminates intimidation while helping little ones gain confidence and independence as they focus on simply balancing. Most babies can balance by the age of 2, so once they get their road-legs they'll be set for a faster transition to a standard bike, no training wheels required.

The incredibly lightweight frame of the Brilrider FLIGHT was designed with children as young as 12 months in mind; made with airplane-grade aluminum, it's tough, durable, and insanely easy to maneuver. That's a bonus for parents, too, since you'll likely be the one hauling it around. Also a bonus? Tool-free assembly and quick-release adjustments of the handlebars and seat.

Speaking of the seat, kids benefit from its 11" starting position. This means not only is the Brilrider sized better for learners—allowing for full control and walking of the bike—but even if they were to fall, there's a much shorter distance to the ground. And the ergonomic angular footrest ensures your kiddo will glide along in comfort to boot.

With 5 out of 5 stars on Amazon, the Brilrider FLIGHT balance bike is sure to have your toddler riding the mean streets of your cul-de-sac in no time. Get it now for just $84, a savings of almost 50%.