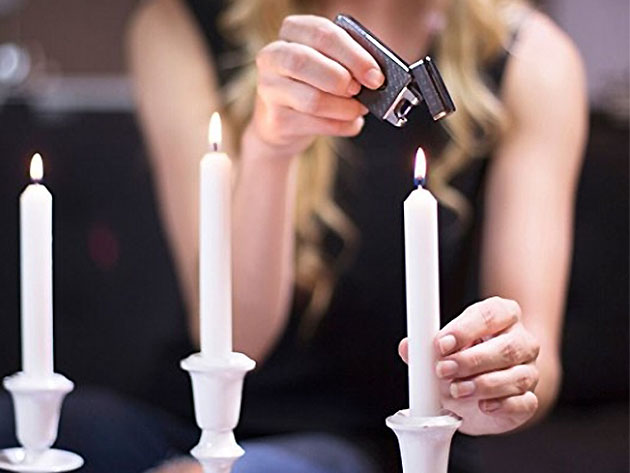 With so many advancements in modern society, you’d think we’d have moved beyond the butane lighter by now. A pressurized, flammable gas, butane fumes can irritate your eyes and skin, can elevate your heart rate, and even lead to cardiac arrest. And we did mention that whole highly pressurized and flammable part, right?

While certainly potentially problematic, butane lighters themselves aren’t normally a massive danger. But it’s 2020. Humans can do better...which got the folks at SaberLight thinking.

Instead of a butane flame, why couldn’t electricity generate a plasma beam even hotter than fire? You know, kind of like having a Jedi's lightsaber light your Marlboros.

After two years of development, SaberLight got it right, creating small hand-held devices powered by an ultra-powerful lithium-ion cell to generate a superheated plasma wave. On top of sounding cool, SaberLight plasma lighters are windproof, splashproof and since they don’t contain any fuel, and are completely airport-safe as well.

USB rechargeable and built to last a lifetime, six different varieties of the SaberLight plasma lighter are now also on sale for $9.99, 75 percent off the retail price.

The Plasma Arc is the model that looks the most like a traditional lighter -- yet with all the cool plasma torch properties you’d expect. It fires up in a heartbeat for use, then just slip it in your pocket for quick and easy transport.

If you’re looking for something a little more sophisticated and elegant, this extended Plasma Lighter might be the one for you. With its elongated 11-inch body, this model can help light candles, spark a campfire or handle lighting responsibilities that require a little more reach.

Speaking of more reach, the extended adjustable neck on the Flex 360 allows you to get a light into even some of the toughest spots. If you’re trying to light a grill or just angle your plasma beam into a tight corner, the Flex 360 offers the versatility to get it done.

Trying to light a pipe is a breeze with the sleek new design of the Zipp Plasma. The cap completely flips open to give you unblocked access to the plasma beams inside for quick and easy lighting.

Why settle for one plasma beam when you can have two? The Sparq Plasm sports a criss-cross beam construction and the same easy-to-reach access as the Zipp for getting just the right light on practically anything.

If you’re looking for the Big Daddy lighter of the bunch, this is your pick. Bigger and more powerful than the Sparq and featuring a tri-node plasma generator (three beams!), the XL is built for cigar aficionados and others who require the most heavy-duty lighting needs.