XSplit VCam is the simple solution to fixing video backgrounds. And it's under $20. 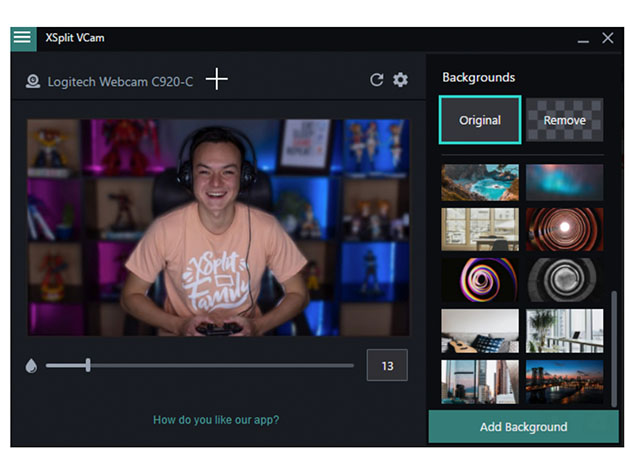 If you shoot videos for your business or just for fun, it's practically inevitable that you'll eventually start wanting to up the production values. For most vlog style videos, it's not like you need Star Wars-level special effects or anything. But even trying to change out your background digitally with a simple green-screen effect requires extra space, precise lighting and…yeah, a really big green screen.

Instead, XSplit VCam has packed in green screen capabilities and other simple effects to instantly up the quality of your videos with their easy to use app.

And we definitely mean easy to use. Just choose your camera source, pick one of the assorted possible backgrounds, and in seconds, your video is transported to any locale with a professional-grade appearance that can often look seamless to the untrained eye.

XSplit VCam also gives you loads of options for getting that background just so. You can insert a GIF, JPEG, a website or even a YouTube video as your background, so your video can take on virtually any feel you want to project. Or if you like the look of your current cam shot, but maybe would like to hide some of the clutter and mess going on in your office or living space, you can add a subtle blur effect to give your video the look of a DSLR style portrait effect that draws viewer attention to you and not your background.

No matter whether you're recording videos or live streaming, XSplit VCam is compatible with a full assortment of services like Open Broadcaster Software (OBS), Steamlabs, and XSplit Broadcaster. It's also great for video calls and can be used to improve your video for conferencing on Discord, Skype, Facebook Messenger, WhatsApp, and more.

Whether you're shooting live podcasts, vlogs, game streaming, virtual interviews or a bunch of other possibilities, XSplit VCam offers you the flexibility to make almost any video look better with the push of a button.